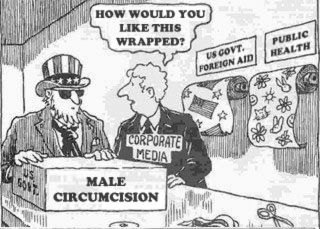 PrePex had been running paid ads on high-end news outlets bidding for the WHO approval that would allow them to cash in on the African HIV/circumcision pie. They had a video on BBC, and ran dedicated articles on the Washington Post and the New York Times, as well as others.

Well, it looks like PrePex entrepreneurs have finally gotten their wish. According to the New York Times, the WHO has finally given their approval for the PrePex device, and PEPFAR leader Eric Goosby has already pledged to buy PrePex devices to circumcise as much as 20 million boys and men in Africa by 2015, under the ostensible pretense of "reducing HIV." 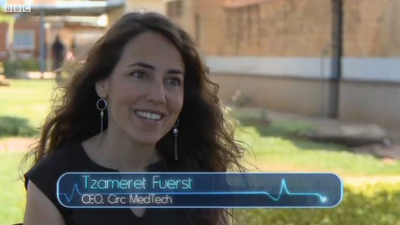 In the New York Times, PrePex CEO Tzameret Fuerst said that the estimated price for each PrePex device would be an estimated $15 to $20 range. If PEPFAR pays for 20 million devices, that's a minimum of $300,000,000 a maximum of $400,000,000 American tax dollars that the program would spend on a dubious practice with speculative benefits, a waste of money considering that there are cheaper, less invasive, more effective ways of preventing HIV transmission.

No Demonstrable Scientific Proof Circumcision Prevents HIV
The sound bite that "circumcision reduces HIV 60%" is repeated over and over like a mantra, the WHO has given their blessing, and interested programs and manufacturers are promising to circumcise millions for foreign aid, but there is actually no scientifically demonstrable proof that circumcision does anything to prevent HIV transmission.

Close scrutiny of the so-called "research," however, reveals that there is actually no demonstrable scientific proof that circumcision does anything to prevent, or even "reduce the risk" of HIV at all, let alone by "60%." Circumcision promoters brush past this fact by distracting their listeners with the less-than impressive "60%" figure, and by mentioning how many men are "lining up to get circumcised." They need the money now, now, now.

There have been recent attempts to posit yet another hypothesis that attempts to explain "how circumcision prevents HIV," but they miss the mark, instead arriving at irrelevant conclusions, and not coming anywhere closer to furnishing the causal link for the so-called "effect" the much talked about "studies" were supposed to measure in the first place. Without a causal link, the "studies" are nothing more than statistics embellished with correlation hypothesis, and the efforts to circumcise millions in Africa are myth-based, not evidence-based.

African Men Not Buying into Circumcision for HIV Prevention
Despite the hyped up "mass circumcision" programs in Africa, it's been report after report of programs failing to meet their quota of circumcising boys and men in the past year.

Though they tried and tried, the much hyped Soka Unkobe program failed in Swaziland, where approximately 34,000 out of the expected 200,000 men (about 17%) were circumcised. Rather than abandon the strategy to mutilate the genitals of the men of Swaziland, American organizers are trying to figure out "what went wrong."Apparently, they feel they feel getting men to agree to have part of their penis cut off is simply a matter of "sending the right message." There is something wrong with an HIV prevention program that measures its progress by how many men they've circumcised, and not by how many they've educated about condoms and safe sex.

Three years into the 5 year program, only 80,000 of 1.2 million targeted men (about 6.7%) have been circumcised in Zimbabwe, and here too circumcision promoters are scratching their heads. Why aren't the men biting?

[There is no evidence that circumcising men in Zimbabwe has any effect against HIV.] 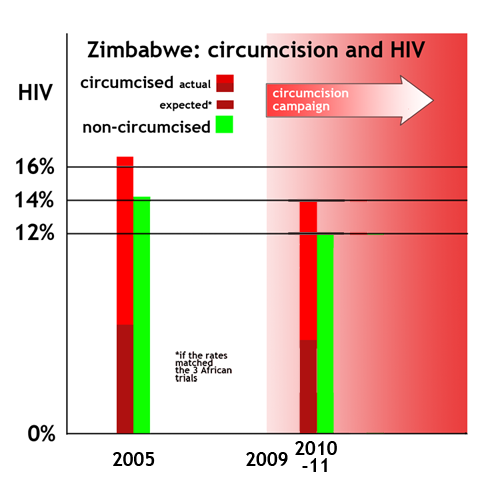 In Botswana, programs are also failing to convince men to cut off part of their genitals. One program circumcised only 685 out of an intended 10,000. In another program, promoters convinced only 360 out of 2560 men (approx. 14%) to get circumcised. Here too, promoters are dumbfounded and can't find the right people to blame. It couldn't possibly have anything to do with the fact that they're trying to convince men to undergo permanently altering surgery on their genitals, could it?

In Zambia, circumcision uptake has also been low.

In Kenya, Homabay district, only 11,000 men have been circumcised out of the estimated 42,000 since September 2008 when the program was initiated. Here too, circumcision uptake has been low, so coordinators are targeting children who are neither at risk for HIV, nor putting others at risk, not to mention the ethical dilemma of forcibly cutting off part of the genitals of healthy, non-consenting individuals. (So much for "Voluntary Medical Male Circumcision.")

The WHO may have given their coveted blessing to plunder African HIV funds to PrePex, and PEPFAR leader Eric Goosby may have pledged American money to pay for their devices, but it remains to be seen whether the devices will actually ever be used, or if they'll simply remain sitting in storage compartments unused.

While a failure to implementing PREPEX would be ironically heartening insofar as it shows that African men aren't buying into the circumcision propaganda, it remains disturbing that millions of dollars that could be providing more effective aid and advances in public health are being wasted and squandered by PEPFAR.

Real World Data Fails to Correlate with "Findings"
While the "60% reduction" claim is repeated, it fails to manifest itself in the real world.

It is interesting that PEPFAR is so eager to help circumcise millions of men in Africa, while circumcision has done America no favors in terms of HIV reduction.

80% of America's male population is circumcised from birth, yet AIDS rates in some US Cities rival hotspots in Africa. In some parts of the U.S., they're actually higher than those in sub-Saharan Africa. According to a 2010 study published in the New England Journal of Medicine, rates of HIV among adults in Washington, D.C. exceed 1 in 30; rates higher than those reported in Ethiopia, Nigeria or Rwanda.

The Washington D.C. district report on HIV and AIDS reported an increase of 22% from 2006 in 2009. According to Shannon L. Hader, HIV/AIDS Administration, Washington D.C., March 15, 2009, "[Washington D.C.'s] rates are higher than West Africa... they're on par with Uganda and some parts of Kenya." (Hader once led the Federal Centers for Disease Control and Prevention's work in Zimbabwe)

According to a recent report:

"HIV/AIDS is the seventh leading cause of death in the United States among people age 15 to 24, and half of young people infected with HIV are not aware of it. An unbelievable 26 percent of all new HIV infections are among those 13 to 24."


Countries where circumcision falls below 20%, and HIV is less prevalent than the United States (By rank in HIV prevalence):

Before handing out millions to gold-mining circumcision device manufacturers, PEPFAR ought to address the question of why something that never prevented HIV in this country is suddenly going to start working miracles in Africa.

PrePex CEO Tzameret Fuerst Gloats
In the following video, Tzameret Fuerst can be seen gloating about securing billions from PEPFAR, one can almost see the dollar signs in her eyes, as if she actually cared about HIV prevention. She repeats the same old circumcision/HIV propaganda, touting circumcision as a "one-time intervention with the efficacy of a vaccine." Sharp viewers may note other thinly veiled interests.

It'd be interesting to see her credentials. She holds degrees in urology, surgery and epidemiology, and can explain to us the mechanism whereby circumcision immunizes a man against HIV I'm sure.

But all is not lost; this new device makes the argument that circumcision would be "more painful, more complicated and more traumatic as an adult" a moot point, if in fact, as Tzemeret tells us, her product is "virtually painless and simple to do."