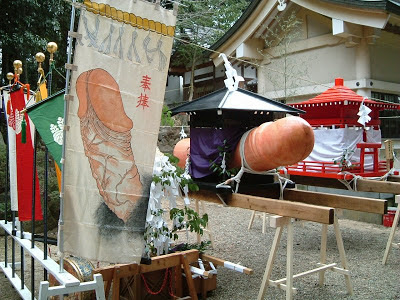 Japanese culture has always fascinated me. I studied abroad in Japan, and decided I would one day like to go back to work as an English teacher, so I could travel around and see the sights.

It is no surprise that I was interested in the ways Japanese perceived the male penis, circumcision, sexuality, nudity and the like, so during my time as an English teacher, I did my fair share of investigating and poking around (pun absolutely intended), so I'd say I have a very good idea.

Some time ago, a distressed person posted some pictures of a Japanese manga-style penile surgery pamphlet on a forum I used to frequent, wanting to know what it was about. Others began to get worried that the pamphlet meant that somehow circumcision had taken root in Japan, and that the forced genital mutilation of children existed there also.

After having looked through the pictures, I decided to post my insights, so that the readers could understand that there was actually nothing to worry about.

I've decided to post a heavily modified version of that response here, so that readers can get an insight on how the penis and circumcision are viewed in Japan.

In advance, readers should know that although my observations are based on my own personal experiences, they are but one person's observations, and are not to be taken as gospel truth. What I share here is knowledge I have gathered on my own, talking to my Japanese friends, going to Japanese bathing facilities, and looking through Japanese literature. My Japanese is very limited, and there maybe nuances that I may be going over my head. The pictures are also very blurry and some words are hard to make out, so I acknowledge others may have more accurate interpretations of what is being said. 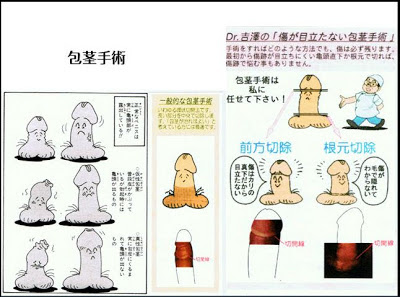 My first observation was that the cartoon drawings, which look like they were taken out of a pamphlet for a particular doctor's office, were a bit dated. In Japan, there are many "clinics" aimed at male clientele.

The heading of the 1st picture reads "包茎手術," (hokei shujutsu) or "phimosis surgery," which implies that the surgery is being offered as a solution for phimosis. In the past, and still today, circumcision is seen as a solution for phimosis, known as "hokei" (包茎, lit. "wrapped stock") in Japanese. Visitors to Japan will still see ads for these "clinics" announcing their "services" to a vulnerable male audience.

As you can see, it is showing examples of an unhappy penis, whose foreskin cannot retract when erect. After the surgery, however, the penis is "happy" because the head can now see the light of day.

So patients can choose from either type.

"Leave your phimosis to Dr. Yoshizawa!", says the comic doctor in the first picture.

You see three series of pictures to your left.

The first is is a "common penis." Or "正常なペニス." (seijo na penisu)

It's hard to read, and I can barely make it out, but it says "the head of the penis usually protrudes." Perhaps this might be normal for Japanese. Or, perhaps, a false "normal" that was introduced to sell this "service."

The second is called "false phimosis," or "仮性包茎." (kasei hokei)

It reads, "the head of the penis is covered, but becomes uncovered upon erection." (Actually, THIS is the common, normal penis.)

"The head of the penis is covered, and does not become uncovered during erection."

The picture in the middle says "a typical circumcision procedure." Or, "一般的な包茎手術." (Ippan-teki na hokei shujutsu.) This is literally translated as "a common phimosis operation," which indicates that circumcision is usually only performed as a measure for phimosis, real or perceived.

This one's hard to make out so I can't read it. But I think it says something like "in a common circumcision, there is an ugly scar left over in the middle of the shaft."

In walks the doctor saying "I can perform an exceptional job, hiding your circumcision scar for you, up close to the corona, or down close to the shaft."

(Well, not exactly in those words, but that's the idea.) 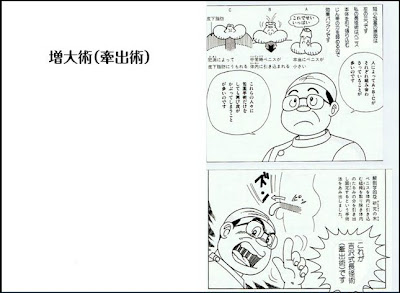 The doc offers a penile lengthening procedure. It's very hard for me to read the text.

Penis A (from right to left) "This is the best I can do!"

Caption: "In actuality, this penis is small."

Penis B (I think it reads, [too small and blurry to read]) "This penis' shaft is buried in the body.)

The doctor seems to say "This is where my expertise comes in. Leave it to me!" 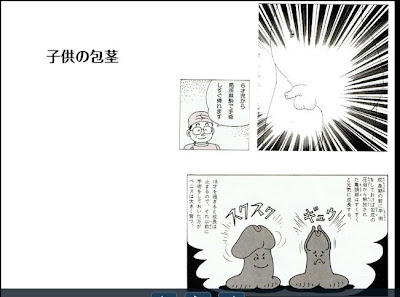 This is the page that was getting people's panties in a bunch.

"From the age of 6 on, a child can have the procedure done and he can go home immediately."

Lower set of pictures, from right to left:

"A phimosed penis will restrict the growth of the glans. However, if you perform the operation in childhood, by the time the child is 18, the head will have grown, giving it a bigger appearance."

This pamphlet must have been written before Japanese studies showed that "phimosis" is normal in childhood.

See an article on the retraction of the foreskin here.

And obviously, the whole glans thing is a crock. Perhaps the doc was appealing to parents who wanted to give their child more prowess. 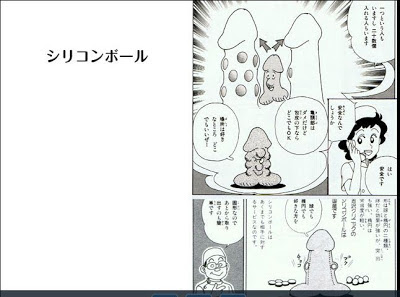 This doctor offers men the option of getting silicone balls implanted in their penis.

Again, offering a man more for his tackle box.

Not worth it to me to read any further. 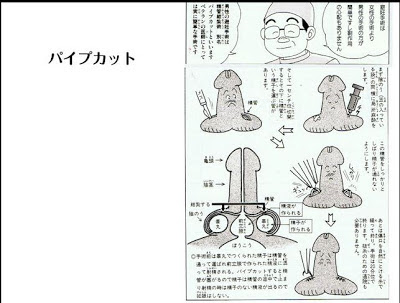 In reference to a vasectomy.

Joseph4GI sez...
As I've said before, from my own experience, having lived in Japan as an English teacher, I can give my own insight.

Circumcision ads are very common in Japan, but they usually offer circumcision as a solution to phimosis, real or perceived, or in the context of "male enhancement." You'll often find these in male oriented books, such as older boys' comics, or girlie magazines. You'll see these ads right next to other "male enhancement" ads, such as pumps, pills and other surgical operations that will make you "better in bed." (You saw the "lengthening," and the silicone implants... some clinics claim to be able to make the head of the penis look bigger... I wonder how...)

Some clinics offer "help" to growing boys, and actually offer pretty good advice. On their websites they'll tell you that if you have "false phimosis," you don't need surgery, and they also offer ways to help without surgery. They will say that if you have "true phimosis," that the best thing for you is surgery. Obviously, not always true, but hey. Clinics need to make their money somewhere.

If you live in Japan, and you have Japanese friends, at some point you'll be invited to go out to a bathhouse or hot springs. (銭湯, sento, and 温泉, onsen, respectively) The Japanese don't have qualms with nakedness, and thus you can see everything clearly, and people don't seem to mind.

From my experience, circumcision tends to be much more common in the older generation, and less common, if even present, in the younger generation. My guess is that perhaps many of the older generation were circumcised in childhood because they were diagnosed with "childhood phimosis" as indicated above. The younger generations tend to be all intact, with some exceptions. (Phimosis diagnosis perhaps? Or perhaps some poor dude whose parents were duped into an operation?) From what I was able to see in the bathhouse, children are NEVER circumcised.

Rolling Back the Foreskin
There is also a phenomenon that can be observed; the older generation has this custom of rolling back their foreskin in the bathhouse. I remember thinking my landlord may have been circumcised (he and I were good friends, and he used to invite me whenever he went out with his buddies), but then one time I caught him with his foreskin down, and he had quite a lot of overhang. With a single motion his foreskin was tucked behind the head of his penis, and he looked circumcised.

So then, some men may look circumcised, when they're actually not. In my experience, younger guys tend not to do this; most younger guys leave their foreskins down and don't care.

Japan is a mixture of different cultures, old and new. I wonder if this foreskin rolling phenomenon is old, or if it's new, created when foreigners tried to import circumcision into the country... I wonder if the idea of "childhood phimosis" existed before the West tried to bring in circumcision, or if it was invented afterwards...

So who gets circumcised in Japan?
I've asked a lot of people about circumcision in adulthood and childhood; my landlord, a few friends and acquaintances, and actually, random people I've met, and they all tell me the same thing. No one really gets circumcised unless they really need to, or if they want to out of style. Children are never circumcised. The people I've asked tell me the idea of circumcising newborns is so foreign that it's not even an option at Japanese hospitals.

One time, I went with a Japanese friend to a baby ware expo they held in the area where I used to live  (she was pregnant, and she asked if I could come along, so I did). There were many booths here and there for many things. Pampers was there, along with Toys R Us (yep, they're in Japan too), various name brand stroller manufacturers etc. There were some booths that offered advice on basic child care, such as bathing, breastfeeding, hygiene etc... I know I shouldn't have been afraid to find some sort of booth pushing RIC, but I somehow was. I was very relieved to stroll around the grounds, and not have found a single cutter in sight. No doubt Japanese parents would be HORRIFIED to see something like that here.

What IS "Phimosis?"
The word for "phimosis" (包茎 hokei) in Japanese is ambiguous. It can mean one of three things:

1. A penis whose foreskin cannot retract the way a normal penis can. (So called, "true phimosis.")

2. A penis who's foreskin does retract, but which still covers the head of the penis. (So-called "false phimosis." Essentially, the Chinese characters for "hokei" are "wrapped stalk.")

3. A penis which isn't circumcised.


In other words, the word for "phimosis" can refer to a penis with a foreskin, whether or not it is suffering a muzzled condition.

My guess is that there are many Japanese men who got circumcised who didn't need the procedure, but may have been duped by a greedy doctor trying to make a buck.

Though circumcision is rare in Japan, it appears the Japanese are about as in-the-dark about phimosis and the normal intact penis as are Americans, and both countries could benefit from an overhaul to their medical curricula.

The word "phimosis"
The Greek word "phimosis" actually refers to a specific condition. It actually refers to a stricture in the foreskin in the penis WHEN AND IF it is caused by Balanitis Xerotica Obliterans (BXO). In this one specific case, some doctors recommend circumcision to alleviate the problem, however others claim to know how to cure it without surgery. If the foreskin is simply narrow and does not allow the glans penis to pass through, the narrowing is called "preputial stenosis," and can usually be remedied without surgery.

Read more on the word "phimosis," what it meant in antiquity, what it came to mean during the circumcision years, and what it technically refers to today, here.
Posted by Joseph at 1:39 PM