Sometimes you've got to help the AAP along.

So what do you do?

You get ambitious pediatricians to give them that extra push.

In a YouTube video published by First Choice Pediatrics, one can see Esther Song brazenly saying the AAP actually does recommend male infant circumcision, and boasting that they use a sucrose solution to help with pain management among other things. 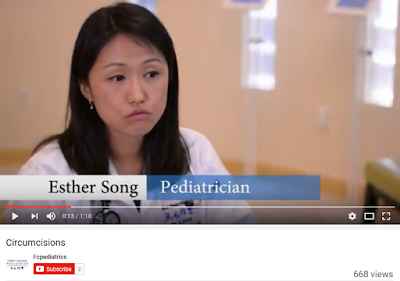 "American Academy of Pediatrics do recommend circumcision for the babies... there's some controversies and the problem is that insurance are not covering it, they're still considering it as cosmetic procedure, but we do believe that it is better for their hygiene, and there's other studies showing that it does decrease rates of sexually transmitted infections... and its' actually quicker healing, and we do use this sucrose solution to calm them down and it is very effective and doctors do use local anesthesia to help with the pain also, so I do recommend getting the circumcision and we do offer the surgery here..." ~Esther Song, Pediatrician, First Choice Pediatrics


So many things wrong here, beginning with the fact that actually, no, the AAP does not recommend male infant circumcision. They stopped short in their 2012 statement stating that the "benefits are not sufficient."

Second, babies don't have sex, so why a possible reduction in sexually transmitted diseases is relevant to tell parents is questionable.

Third, she is talking about pain management that has been shown by studies to actually be quite ineffective.

Here is what one study on "sucrose solution," or sugar water has to say on the matter:


I think it is clever how she makes the controversy about "insurance companies not covering it," and doesn't get into how human rights groups consider it to be mutilation and a human rights violation outside a valid medical necessity.

Will she inform parents about how circumcision has been abandoned by pretty much every other English-speaking country?

I guess you can't talk about that if you're trying to sell circumcision to parents, can't you...

One of the persons in the videos said that babies "sleep through the procedure." I'm guessing she thinks, or she hopes, YouTube videos aren't available for parents to watch, and that parents wouldn't bother to see them, because no, babies don't sleep through the procedure. And they certainly aren't asleep during the post-operation diaper changes when the babies scream their lungs out. There are YouTube videos for that too.

How stupid do the folks at First Choice think parents are?

"It is difficult to get a man to understand something when his salary depends on his not understanding it."


So the only thing really going for First Choice is their "belief" that male infant circumcision is more "hygienic." Why they don't believe in soap and water like the rest of the English-speaking world is puzzling.

I wonder what the American Academy of Pediatric thinks about medical groups deliberately misquoting them for profit...

For their own benefit, we do hope the folks at First Choice are willing to rectify the deliberate misinformation they're feed parents.

Statements by Other Organizations
Just for fun, here is a list of statements on circumcision released by medical organizations around the world.

"The British Medical Association has a longstanding recommendation that circumcision should be performed only for medical reasons... Recent policy statements issued by professional societies representing Australian, Canadian, and American pediatricians do not recommend routine circumcision of male newborns".
~AMA Report 10 of the Council on Scientific Affairs

Canada
"Current understanding of the benefits, risks and potential harm of this procedure no longer supports this practice for prophylactic health benefit. Routine infant male circumcision performed on a healthy infant is now considered a non-therapeutic and medically unnecessary intervention."
~College of Physicians and Surgeons of British Columbia

"[We] do not support recommending circumcision as a routine procedure for newborns."
"Circumcision of newborns should not be routinely performed."
~The Canadian Paediatric Society

Australia
The Royal Australasian College of Physicians stated in 2010 that the foreskin "exists to protect the glans" and that it is a "primary sensory part of the penis, containing some of the most sensitive areas of the penis."
According to the Australasian Academy of Paediatric Surgeons:

"The Australasian Association of Paediatric Surgeons does not support the routine circumcision of male neonates, infants or children in Australia. It is considered to be inappropriate and unnecessary as a routine to remove the prepuce, based on the current evidence available."

"We do not support the removal of a normal part of the body, unless there are definite indications to justify the complications and risks which may arise. In particular, we are opposed to male children being subjected to a procedure, which had they been old enough to consider the advantages and disadvantages, may well have opted to reject the operation and retain their prepuce."

"Neonatal male circumcision has no medical indication. It is a traumatic procedure performed without anaesthesia to remove a normal functional and protective prepuce. At birth, the prepuce has not separated from the underlying glans and must be forcibly torn apart to deliver the glans, prior to removal of the prepuce distal to the coronal groove."

Netherlands
In the Netherlands, the Royal Dutch Medical Association (KNMG) issued a statement in 2010 stating that "The official viewpoint of KNMG and other related medical/scientific organizations is that non-therapeutic circumcision of male minors is a violation of children’s rights to autonomy and physical integrity." Circumcision can cause complications, including infection and bleeding, and are asking doctors to insistently inform parents that the procedure lacks medical benefits and has a danger of complications. In addition to there not being any convincing evidence that circumcision is necessary or useful for hygiene or prevention, circumcision is not justifiable and is reasonable to put off until an age where any risk is relevant, and the boy can decide himself about possible intervention, or opt for available alternatives. They went on to say "There are good reasons for a legal prohibition of non-therapeutic circumcision of male minors, as exists for female genital mutilation."

Related Posts:
AAP: Around the Bush and Closer to Nowhere