Nurse Shames a Mom for Not Having Son Circumcised 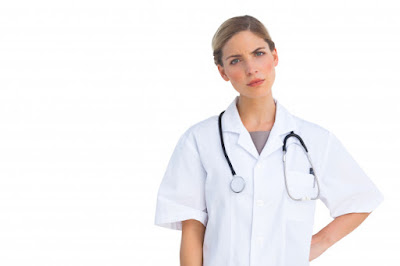 So I'm scrolling through my Facebook news feed and I run across this story; apparently, nurses can shame moms who didn't have their sons circumcised.

The story was published on Distractify and can be accessed here.

According to the story, a nurse was telling a mother she needed to register a circumcision form at the hospital. When the mother told the nurse she didn't need one as she was not having her son circumcised, the nurse gave her the following remark:

"Honestly, I don't know why we have a form for it. They should just automatically do it to everyone. I can't imagine why some people don't circumcise their sons. It's just so disgusting. I have three boys and of course they've all been circumcised."


Obviously the nurse was brazenly inserting herself into this conversation trying to justify *her*self by giving accounts of her life nobody asked for.

Personally, I don't think there's a problem when two people are having a conversation about circumcision. This happens all the time. I think it's generally a good thing that people are talking about it, as it does give mothers who didn't have their sons circumcised to talk about their decision.

Especially on social media, I think it's totally appropriate for mothers to talk about their own experiences and their own opinions.

This situation, however, is different.

Unlike a conversation happening between peers in person or on social media, we have an uneven power dynamic here, where a nurse, who is supposed to be a professional, is shaming a patient and inserting herself into the conversation.

What would happen if the scenario where reversed?

How would it play out if a nurse had told the parent "I can't see why people circumcised their sons. It's so disgusting. I have three boys and of course none of them were circumcised."?

That nurse would probably not have a job anymore, no doubt.

I have actually heard of a case where an intactivist nurse very politely tried to talk to parents about the possibility of leaving their baby boys intact, not even with the snarky attitude as the nurse in this story. Nothing like "this is disgusting," but rather trying to give parents information. You know? So that parents could make an "informed decision."

Needless to say, the parents complained to the nurse's higher-ups that they felt "harassed" and "uncomfortable" that the nurse was "prying into her business."


According to this story, the mom asked other moms in the "Parenting" subreddit and apparently this is not that uncommon.

"After I had my son every nurse that came in the room asked if I scheduled the circumcision. I had to keep telling them I wasn’t doing it. It got awkward after the third time," one mom wrote.

"When I had both of my boys they pushed it," another mom wrote. "Everyone that came into the room asked if it was going to get done. I’m surprised it didn’t get 'done by accident.'"

"Healthcare worker here!" another person wrote. "I’ve heard of this happening before, and it’s pretty common. Honestly, I would report her to your doctor."

I sincerely hope this parent did.

I don't think it's a problem if nurses are trying to genuinely inform parents so that they make an informed decision, but inserting your own opinions that anatomically correct genitals are "disgusting" crosses that line.

It's definitely a double-standard that nurses can outright shame parents for not having circumcised their children, but a nurse can't provide accurate information regarding anatomically correct genitals.


External Link:
Mom-to-Be Got 'Circumcision-Shamed' By a Nurse During a Doctor's Appointment
Posted by Joseph at 6:37 AM