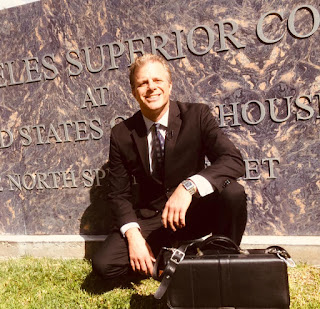 Coronavirus keeps me busy. I (very fortunately, and very gratefully) have a job to work, and I've got kids with pent-up energy from not being able to go out to wrestle with and take care of at home.

I barely have enough time to check out social media, let alone engage in intactivism.

This is why I'm only barely finding out about this man's murder.

I just logged into my Facebook account to find out intactivist attorney Marc Angelucci was found shot to death at his California home in San Bernardino, on Saturday, July 11th at around 4pm.

According to a news report, when Twin Peaks deputies arrived on the scene, Angelucci was found non-responsive and suffering from gunshot wounds. He was pronounced dead at the scene, and the motive for the shooting is unknown.
Who is to say for sure why this man got shot? 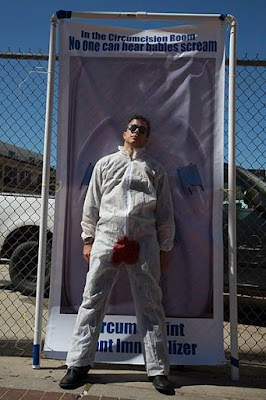 Marc Angelucci posing in "bloodstained man" attire,
in front of a blown up picture of a circumstraint,
the restraining board on which doctors fasten babies
to forcibly cut off part of their penises.
Angelucci was an outspoken intactivist attorney.

He was one of the first seven men who protested as part of a group known as the "Bloodstained Men," a group of intactivist who protest male infant circumcision wearing white clothing with the crotch area stained red to represent blood.


Angelucci was also the vice president and a board member of the National Coalition for Men. His death is a terrible loss for the legal community and for the intactivist and human rights community.
Perhaps his activism had something to do with his murder?
I do hope his murderers are caught, arrested and brought to justice.

His death is a terrible loss for the legal community and for the intactivist and human rights communities.

The lawyer working on the big lawsuit against CPS in California that I just wrote about was murderedhttps://t.co/brMxWDLJm7
— Patrick Howley (@HowleyReporter) July 12, 2020

It was a homocide. Most likely a hit. He was just about to win a huge case in Mariposa county that had been going on for years. Can’t say much more beyond that at this time. Incredible man though and did a lot of great work for the community, fathers and men. I’m in shock.
— DeAnna Lorraine 🇺🇸 (@DeAnna4Congress) July 12, 2020

Who could have done this...