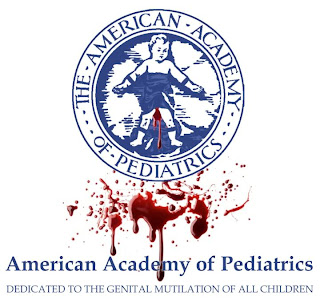 We've all seen it all before. Media outlets wave about the so-called "latest research" from Africa, and they keep insinuating that the AAP is "about to recommend" circumcision. The hype would actually not be based in fiction, as leaders from the AAP and CDC have been saying they're working on new position statements on circumcision.

Well, according to the Washington Post, it looks like the AAP is finally getting ready to release a new policy statement sometime by the end of this month, and some commentary by one Michael Brady has intactivists worried. According to Brady:


"While details are not yet available, the new position concludes that the health benefits of circumcision outweigh the risks, said Michael Brady, a pediatric expert at Nationwide Children’s Hospital in Columbus, Ohio, and a member of the AAP’s task force on circumcision."

If Brady is right, the AAP will be the first medical organization in the world to actually make the claim that the "health benefits of circumcision outweigh the risks."

There is already a letter-writing campaign and a petition. (If you're on Facebook, you can see a page devoted to writing to the AAP here.) But before they jump to conclusions, intactivists need to remember that the AAP and CDC have been leading on that they're "about to release new position statements on circumcision" for a few years now. They keep saying their statements are about to come out "this spring," or "by the end of the year," or "at the beginning of next year," and yet their "new statements" don't seem forthcoming. That is, until now...

The number of times the eminent AAP position statement has been postponed raises the question; what's been taking them so long?

In this post, I will explain why intactivists need not get too worried.

Media Hype: The "Great Circumcision Controversy" Trope
Could it be that there are unseen figures spurring media outlets on to release pro-circumcision articles and reports? (What with the Cologne ruling and all?) Or is it that media outlets are suffering slumps in their ratings, and they periodically release hyped up stories on "the benefits of circumcision" because they know it generates controversy? Or is it a combination of the two?

American audiences may not be aware at first glance, but media outlets are perpetrators of what I call the "Great Circumcision Controversy" trope. That is to say, that they are taking advantage of viewer gullibility, not to mention the fact that circumcision, particularly the circumcision of healthy, non-consenting infants, is a custom that is already deeply entrenched in American culture, to create "controversy" where there is actually none.

How it works; in order to encourage the belief that male circumcision is a surgery that is carried out for medical reasons, media outlets present male circumcision as a controversial and ongoing debate between altruistic "expert" medical authorities, who are attempting to vouch for male infant circumcision as "disease prevention," and the resistance of extremist "special interest" groups. However, this portrayal of reality is not at all consistent with the view of male infant circumcision given in the position statements of world medical authorities.

While the media presents male circumcision as an "ongoing debate" going on between medical "experts" and angry activists, the trend of opinion on routine male circumcision is overwhelmingly negative in industrialized nations. No respected medical board in the world recommends circumcision for infants, not even in the name of HIV prevention. They must all point to the risks, and they must all state that there is no convincing evidence that the benefits outweigh these risks. To do otherwise would be to take an unfounded position against the best medical authorities of the West.

How Do Medical Boards In and Outside the US View Infant Circumcision?
According to the American Medical Association (AMA) Report 10 of the Council on Scientific Affairs:

"The British Medical Association has a longstanding recommendation that circumcision should be performed only for medical reasons... Recent policy statements issued by professional societies representing Australian, Canadian, and American pediatricians do not recommend routine circumcision of male newborns".

In their last position statement on infant circumcision, the American Academy of Pediatrics (AAP) stated that:

"...benefits are not sufficient for the American Academy of Pediatrics to recommend that all infant boys be circumcised."

In their "Position Paper on Neonatal Circumcision, the American Association of Family Physicians (AAFP) stated:

"...the association between having a sexually transmitted disease (STD) - excluding human immunodeficiency virus (HIV) and being circumcised are inconclusive... most of the studies [of the effect of circumcision on HIV] ...have been conducted in developing countries, particularly those in Africa. Because of the challenges with maintaining good hygiene and access to condoms, these results are probably not generalizable to the U.S. population".

According to the College of Physicians and Surgeons of British Columbia:

"Current understanding of the benefits, risks and potential harm of this procedure no longer supports this practice for prophylactic health benefit. Routine infant male circumcision performed on a healthy infant is now considered a non-therapeutic and medically unnecessary intervention."

"[We] do not support recommending circumcision as a routine procedure for newborns."

The Royal Australasian College of Physicians stated in 2010 that:

"[The foreskin] exists to protect the glans [and that it is a] primary sensory part of the penis, containing some of the most sensitive areas of the penis."

In the Netherlands, the Royal Dutch Medical Association (KNMG) issued a statement in 2010 stating that "The official viewpoint of KNMG and other related medical/scientific organizations is that non-therapeutic circumcision of male minors is a violation of children’s rights to autonomy and physical integrity." Circumcision can cause complications, including infection and bleeding, and are asking doctors to insistently inform parents that the procedure lacks medical benefits and has a danger of complications. In addition to there not being any convincing evidence that circumcision is necessary or useful for hygiene or prevention, circumcision is not justifiable and is reasonable to put off until an age where any risk is relevant, and the boy can decide himself about possible intervention, or opt for available alternatives. They went on to say "There are good reasons for a legal prohibition of non-therapeutic circumcision of male minors, as exists for female genital mutilation."

6 Years, and Still No Change
It has been 6 years since the WHO used some very dubious "research" to endorse male circumcision to prevent sexually transmitted HIV in Africa, and yet, with the exception of the CDC who has endorsed it on adult males in Africa, no other medical organization in the world has followed suit. Even the CDC falls short of endorsing infant circumcision in the name of HIV transmission. If the best medical authorities in the West have not endorsed infant circumcision, it is because they have reviewed all of the evidence and have found it to be insufficient.

So Why Doesn't the AAP Simply Just Come Out Against Infant Circumcision?
People have a misconception of what the AAP actually is. Most think it is this altruistic organization whose prime interest is the health and wellbeing of children. The fact of the matter is that they are nothing more than a trade union whose prime purpose is the protection of the interest of its members.

Therefore, the AAP has a delicate balancing act to preform. On the one hand, they cannot put members who profit from the procedure in a tight spot. On the other, they cannot actually jeopardize their credibility by releasing a statement that will defy the whole of modern medicine. And, as a professional medical organization that is, at least ostensibly, concerned with the well-being of children, they're expected to take a position, keeping it up to date. 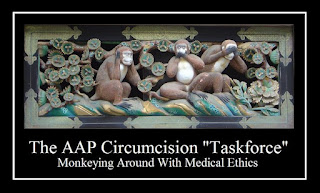 The true purpose of the so-called "circumcision taskforce" is therefore not to actually "weigh the evidence," but to appear to mull the so-called "evidence" and figure out how they can keep the AAP from ever coming out against circumcision, weaseling out of addressing the ethical concerns of cutting off normal, healthy tissue from healthy, non-consenting infants, while still appearing to be professionally, ethically responsible. Basically keep their circumcising members blameless and in business, while feigning an interest in the well-being of children.

The AAP endorses FGM, backpedals shortly afterward...
This is not the first time the AAP is under fire for a questionable position statement on genital cutting; in 2010, the AAP advocated for allowing female genital mutilation in the form of a “ritual nick”, under the pretext that endorsing said "ritual nick" might dissuade parents of immigrant daughters from taking them abroad to undergo a more severe form of genital mutilation. The AAP admitted that the so-called "ritual nick" would dwarve in comparison to male infant circumcision. Not surprisingly, this position was met with a world outcry, and the AAP had to promptly withdraw their statement.

In the end...
Oh there's no doubt about it. The new AAP position statement is going to milk every so-called "benefit" for what it's worth. It's going to dance around the HIV "research" in Africa numerous times. They're going to huff and puff and blow as hard as they can. In the end, however, like pretty much the rest of the medical authorities in the West, they're going to have to conclude that there still isn't enough evidence to endorse the circumcision of healthy minors, and fall short of the much hoped-for "recommendation"circumcision advocates keep pining for, and still insist "parents must weigh the pros and cons," continuing to rid themselves of any professional responsibility. After much ado, their stance will remain comfortably "neutral," never actually having "recommended it."

I say again; unless the AAP seriously plans to jeopardize their credibility by defying the whole of modern medicine, they're going to continue sitting on the fence, as Hugh Young put it, shifting their bottoms on it every once in a while.

A passage in the Washington Post article already reads:

"The AAP’s new position falls short of a routine recommendation, Brady said, adding that parents should continue to take into account their own cultural, religious or social views."

In other words, the new statement will be nothing but more of the same.

But this little detail, as usual, will be unimportant for circumcision advocates and American media to report...

Intactivists should learn not to panic every time some news outlet releases some new blurb some pro-circ quack manages to publish. This is nothing more than a saber-rattling tactic, and seeing intactivists panic is precisely what the pro-circs want; it gives credibility to their accusations that we're just a bunch of loons.

DISCLAIMER:
The views I express in this blog are my own individual opinion, and they do not necessarily reflect the views of all intactivists. I am but an individual with one opinion, and I do not pretend to speak for the intactivist movement as a whole, thank you. ~Joseph4GI