It's the internet; it's a freedom of speech free for all. I've seen quite a few pro-circumcision propaganda posters, and I've seen so many that I thought I was used to it.

Which is why I was surprised to find the this picture in my Facebook news feed today, particularly from a group that calls itself "Granola Babies." 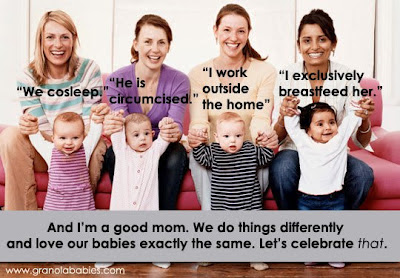 Can you spot what this group craftily decided to sneak in there?

"Granola Babies" gives off the impression that it's a group for crunchy moms, and as far as I was aware, crunchy moms want everything that is the most natural for their kids, which is why I thought it rather revolting to see this picture trying to pretend like circumcision fits right up there with co-sleeping and breast-feeding. The "I work outside the home" seems pointless up there; who cares WHERE you work, as long as you're taking care of your kids.

The caption that accompanied this filth read:

"Let's celebrate our differences as mothers and that we love our babies the same. ♥"

No, seriously, what self-serving, self-congratulating crap.

As if circumcision were this "choice" parents are entitled to, much less a "crunchy" one.

This to me seems like nothing more than a deliberate inflammatory piece of propaganda aimed at inciting the ire of human rights activists.

And they knew exactly what they were doing. Oh yes they did.

"Update on this picture ~ Unfortunately the message was lost on some and many unkind posts towards other posters (now deleted) have been made and are not such that Granola Babies is willing to host. There were even a couple of posts stating that mothers do not love their babies the same if she did ___ (insert box) different than her.

In particular -
All posts that continue the circumcision debate will be deleted. This isn't a platform for this debate."

I've said it before on a different blog post, but if people don't want to hear it from us intactivists, if they don't want to host the "circumcision debate," why post inciteful things at all?

I posted more than a piece of my mind, and as promised, my comments were promptly deleted.

But they are gravely mistaken if they think they're going to post this crap and not hear about it from intactivists.

These self-serving idiots just want to pretend like mutilating your child is "just another choice" and we should all be "celebrating our differences."

Well, what do they think of mothers who have gone ahead and circumcised their daughters?

Should we "celebrate" that?

Maybe it's "different" with said mothers of circumcised daughters, and they don't "love their children the same?"

The fact is, if being a parent justified everything you did with your children, then there wouldn't be a need for child protective services.

There is such a thing as horrible parents out there, and at some point what they do to their children crosses over into abuse, and shit has to hit the fan.

"Granola Babies" seems to be in the business of pleasing the masses and just issuing out touchy-feely slogans and propaganda that congratulates idiotic parenting.

In the words of John Steinbeck:

"No one wants advice, only corroboration."


And, it looks like "Granola Babies" is more than happy to supply it.

I've taken their sick disgusting poster and made a parody of it: 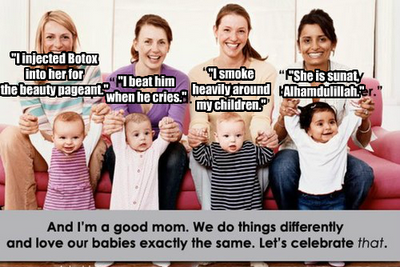 But you know what, this isn't about parents.

I don't blame parents for making a "choice" based on the "advice" their charlatan pediatrician or OB/GYN gave them. Can parents be blamed if they were told that not circumcising their children would result in their child getting penile cancer and dying of AIDS?

The bottom line question is always this:

Without medical or clinical indication, can doctors even be performing surgery on healthy, non-consenting minors, let alone be giving their parents any kind of "choice?"

Without a medical or clinical indication, how is it doctors are even stoking in mothers this false sense of entitlement?

That is "Granola Babies'" biggest failure; they are perpetuating the myth that parents are entitled to perform needless surgery on their healthy, non-consenting children.

Does "Granola Babies" celebrate the "choice" of mothers who chose to have their daughters circumcised?

What if it were a "ritual nick" as once approved by the AAP, where they said it dwarves in comparison to male infant circumcision?

Let's see how much support "Granola Babies" gives mothers who had "sunat" performed on their daughters.

Related story:  GRANOLA BABIES: Responses to "Celebratory" Ad
Posted by Joseph at 1:55 AM