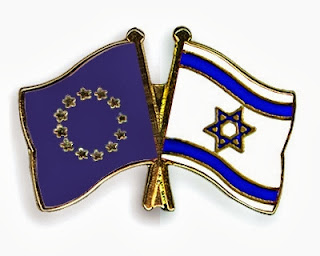 It's been only a few days since the Council of Europe declared the medically unnecessary circumcision of healthy, non-consenting minors, to be a human rights violation, and, as predicted, it has drawn non-stop fire from Jewish organizations.

Said Benjamin Albalas, President of the Central Board of Jewish Communities in Greece:


If one reads the comments to these articles criticizing the Council of Europe for their stance, the argumentum at Hitlerem is never-ending.

But this was to be expected; Israel also got involved when the Cologne ruling was handed down in Germany, causing the Bundestag to write up a resolution "protecting" non-medical child genital mutilation.

Poor Europe, stuck between a rock and a hard place; they must perform a delicate balancing act, wanting to protect basic human rights, while at the same time, appeasing Jews who hold the Holocaust ever over their heads.

Special Pleading
In his letter to the European Council Secretary General, Shimon Peres stressed that infant circumcision is of "great importance" in Jewish and Muslim religious tradition. (Since when does the Israeli President care about Islam?) He also noted that male circumcision has been practiced by Jewish communities for thousands of years and is a " fundamental element and obligation of Jewish tradition." Peres stressed that Jewish communities across Europe would be "greatly afflicted to see their cultural and religious freedom impeded upon by the Council of Europe," which Peres observed is "an institution devoted to the protection of these very rights."

Of course, Shimon Peres, and other advocates of circumcision that make these arguments are employing logical fallacies, either inadvertently, or quite deliberately.

Of course, where it is practiced, female circumcision has also been practiced "for thousands of years," and those who practice it see it as a "fundamental element" and obligation for their traditions. Communities across Europe who practice female circumcision are also "greatly afflicted" because their "cultural and religious freedoms" are infringed upon by the local government. But, apparently, while the Council of Europe is to condemn the forced genital mutilation of females, ad antiquitam should afford male genital mutilation special treatment.

Circumcision is Not Exclusive to Jews
Accusations of anti-Semitism are based on three assumptions:


The fact is, circumcision is not exclusive to Jews.

A commenter on Facebook made the following observation:
Jews are 1.7% of the US population (5,425,000 out of 313,900,000) and only about 30% of American Jews have a bris; the remainder have their son circumcised in the hospital or doctor's office just like all other American boys or skip circumcision. By my math, 30% of 1.7% is just over one half of one percent, or one-sixth of your figure. 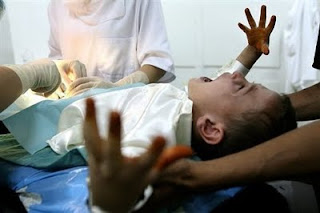 In Muslim tradition, boys are circumcised at later ages,
when they can remember. Here, a boy is being circumcised
at a medical facility in Turkey. Note his white circumcision outfit. 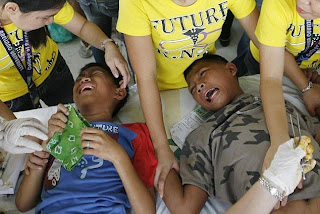 In Marikina, east of Manila, boys "receive" their "free" circumcisions. 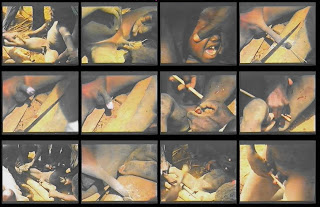 Boy in Africa being circumcised.

(Only one of the above "traditions" should be a human rights violation, according to circumcision advocates. Can you guess which one?)

In addition, circumcision is not universal among Jews. There are Jews in Europe who have been leaving their children intact for years. A growing number of Jews are forgoing a traditional Bris Milah circumcision ceremony, and instead opting for a more peaceful, non-cutting Bris Shalom naming ceremony. Even in Israel, there is a growing number of parents who are not circumcising their children. A recent poll reveals that 1/3rd of Israeli parents question the practice.

And finally, it would be one thing if intactivists targeted the Jewish ritual of infant circumcision. The fact is that intactivists oppose the forced genital cutting of ALL minors, regardless of race or creed. Jewish bris is only one form of male infant genital mutilation. We're opposed to ALL of it.

It is dishonest for Jewish advocates of circumcision to pretend like they're being "singled out," when this clearly isn't the case. Little by little people are seeing through this smear tactic, as more and more people have the courage to speak out, despite the threat of being labeled Nazi-Germans.

Questions to consider:
For better or for worse, the forced genital mutilation of females has also existed "for thousands of years," and it is considered an important rite of passage where it is performed. In some tribes and communities, a woman who has not undergone genital cutting is seen as a social outcast.

Is declaring the forced genital cutting of girls to be a "violation of human rights" not "affliction" to those living in Europe who practice it?

Is being against the forced cutting of girls and women "anti" ethnic groups that do it? (e.g. anti-African, anti-Indonesian, anti-Malaysian, anti-Brunei, etc.?)

Is a ban on female circumcision not infringing on "religious" or "parental rights?"

If leaders of countries where female genital cutting is practiced were to write to the Council of Europe, would they be obliged to soften their stance against the forced genital cutting of girls?

Why the special treatment of only MALE forced genital mutilation?

When are world leaders going to cut the political pandering and call a spade a spade?

Intactivism: It's Not Just for Gentiles Anymore
The "Anti-Semite" Card No Longer Washes
So Where's the "Sunat Party?"
Posted by Joseph at 1:38 PM