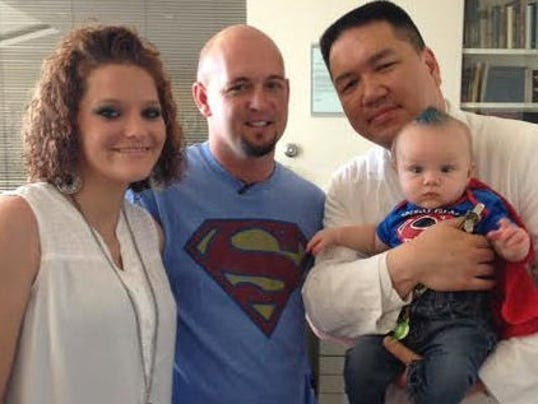 My one burning question was, OK, so he lost his own penis through circumcision. HERE IT IS FOLKS! Partial or complete penile ablation is a risk of circumcision, and here we have a living example. Would he go on to circumcise his own son?

Dishearteningly, I read today that the answer was yes, he would.

And, it seems he and his wife are choosing to believe in comforting lies for their own sakes. Here is an excerpt from the article:

"Mike "was nervous about having him circumcised," his wife, Heather said, "but there was no cutting involved – just a little plastic ring that goes around him and then it just falls off."

The procedure went smoothly, and everyone is happy and healthy and in tact."


I am absolutely floored.

I mean, you think after having LOST YOUR PENIS, you would say "No way this is happening to my son."

Here, we see his wife touting a myth that just isn't true.

She's talking about the Plastibell method of circumcision, and contrary to the lies she is either being fed, or telling herself for her own sake, yes, there is cutting.

Not only is there cutting, but the Plastibell method is actually notorious for complications. (WARNING: GRAPHIC. Visit link at your own risk.) Were they informed on them?

Did they see the above complications and STILL CHOOSE to put their perfectly healthy son through this?

"The procedure went smoothly, and everyone is happy, healthy and intact."

Who is "everyone?" Have they asked the kid? Was the kid UN-healthy beforehand?

I'm sorry, but any which way you try to slice it, no, this child is no longer intact.

Perhaps to a lesser degree than his father, but this poor child has a mutilated penis.

Yes, I dare say it, 30% of the world's male population are living with mutilated penises. Perhaps they are blissfully ignorant about it, but they are.

I'll tell you what was going through this man's head; circumcising his son was necessary to validate what he went through. His son remaining intact would have been a daily reminder that he lost his own penis to a needless procedure with risks. There was a mental necessity for this father to have his son "safely on the other side," for his own reassurance that (despite his own missing penis) circumcision is "harmless."

I'll I've got to say is, really dude? After losing your penis to circumcision you, STILL thought putting your own child through this was a good idea?

I hate to say it but what a shame. Shame on this father, shame on the doctor. And shame on this article for allowing the dissemination of misinformation.

This man's story is a living example of what can go wrong.

No, the circumcised penis is NOT "intact," it is MISSING an intrinsic part with which all boys are born with.

Absolutely disheartening to learn that in spite of it all, this man went through with inflicting his son with the same risk that lost him his own penis.

Even after having had to employ artificial insemination to conceive him he STILL went through with it.

What was this man smoking?

What were the doctors that went through with it on?

In what mind is it acceptable to put a perfectly healthy child through needless risk?

A risk for which the example is hanging right between your legs?

There are no words.

I'm in utter disbelief.
Posted by Joseph at 2:21 AM