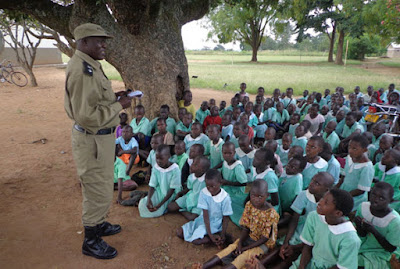 But now, it seems that "voluntary" doesn't even matter anymore, and organizations are taking it upon themselves to visit schools and circumcising male students without even consulting parents on the matter.

District medical workers came, and a woman filling in for the head teacher (she was away on sick leave) simply authorized them.

When queried, the official in charge of the facility where the boys were circumcised, Harriet Amuat, insisted they were carrying out a government programe and Soroti District administration had signed a partnership with Baylor Uganda to fund the circumcision exercise in Teso sub-region.

The question is, who gave the go-ahead with a "circumcision exercise" that would forcibly circumcise healthy, non-consenting children, completely sidelining their parents?

Who held these talks?

Who made the preposition that children were to be circumcised without informing their parents?

Incidentally, Baylor Uganda is funded by none other than PEPFAR and the CDC. The CDC, a strong partner and supporter of BIPAI’s efforts in Uguanda, provides a majority of the Baylor-Uganda $24 million annual budget, through the U.S. President’s Emergency Plan for AIDS Relief.

American organizations are essentially bankrolling the forced circumcision of healthy, non-consenting children. Some may argue that "parents can give consent," but in this case even parents were disregarded.

Not the first time
This might be dismissed as a "one-time accident," but unfortunately, this is not the first time this has happened; a similar case happened recently in Eldoret, Uasin Gishu, just this April.

In this case, 30 children were forcibly circumcised by NGO Impact Research Development Organisation (IRDO) based in Kisumu, which has a clinic in Eldoret. Apparently the children were lured by strangers into cars with sweets.

Here too, parents protested the fact that their children had been forcibly circumcised without their knowledge.

It appears here too, the NGO has ties with PEPFAR, as evidenced by the "about" tab on their Facebook Page.

In yet an even earlier incident, high school students were being targeted at Embakwe High School.

Here too parents were furious to find that their children came home circumcised.

I cannot find any reference as to who gave the go-ahead, and who financed it in the linked article.

Wrong on so many levels
First off, the "mass circumcision" roll-outs are based on questionable material.

Even if the so-called "research" could be lent any credibility, circumcision would still be considered so ineffective at preventing HIV, that circumcised males and their partners must be urged to wear condoms. There is not a single doctor or "researcher" that can deny this fact.

If adult men wish to be circumcised, even being fully informed, that's one thing, but it is despicable that the procedure is being presented to parents as a "decision."

But lastly, it is simply horrific that children are being forcibly circumcised, completely disregarding their parents, and something needs to be done about it.

Was this an accident?

Or was it deliberate?

Those who authorized programs that go to schools and circumcise children without their parents' knowledge ought to be investigated and held responsible.

School circumcises pupils without parents knowledge
Posted by Joseph at 11:00 AM