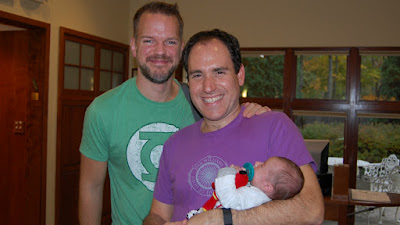 I had seen this phenomenon before, but I hadn't really given it much thought. Several years ago, my attention was brought to a blog of a Jewish woman outlining her adoption and circumcision of boys from Russia, and the thought of having been adopted by Jewish parents horrified me. Like, I can't recall the blog anymore, but if I remember correctly, these weren't even baby boys, these were older boys not older than 10.

How horrific to be yearning for parents, only to be adopted by strangers who immediately proceed to make arrangements to have someone forcibly cut off part of your most private, most intimate organs. I don't know what I'd do had I been one of those Russian boys.

At any rate, I ran across this on Facebook: 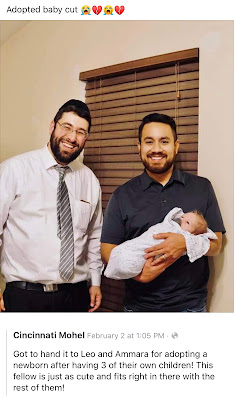 I don't know what to think when Jewish people actually flaunt having adopted male children and having them circumcised.

Like, it's horrifying enough that cutting off a part of a child's penis seems to be like, the defining cornerstone of Judaism. Now they have to mutilate the organs of a child who's not even Jewish?

I'm trying real hard not to be an anti-Semite here, but this is seriously getting to a point.

I grew up in a very conservative, pro-Israel, pro-Jewish church.

In becoming an intactivist, going against what is supposed to be the very tenet of Judaism, the "covenant" on which the entirety of Judaism is based, I knew I was going to become something I was taught in my church to hate and despise.

These are feelings I fight with every time I think about being horrified by doctors and mohels taking knives and cutting off part of children's penises.

But the more I read about this, the more I'm leaning to the "I don't like Jews" side.

I keep telling myself; some of our more outspoken voices are Jewish people.

I know that not all Jewish people are proponents of male infant genital mutilation.

I know that Jewish people not mutilating their baby boys are increasing.

I know that Jewish people speak out with us.

I want to believe that not all Jews support this, and that some have even created the Bris Shalom ritual to replace the mutilation ritual.

There is at least one website that I've come across in the making of this post that outlines that male children that Jewish families adopt must be ritually mutilated.

It's just casually written there, and nobody is saying anything about it.

Like, I admit it, this is probably going to sound real "anti-Semitic," but Jews, Muslims, ANYBODY who plans on ritually mutilating a male child should not be allowed to adopt.

And anyone who does this to an adopted child should lose custody of that child and they should never be allowed to adopt again.

And this isn't just Jews, because I've also read about American families taking an adopted male child and having him circumcised just after.

It's wrong and it ought to be a crime to forcibly cut the genitals of children.

I realize this is a hairy situation where we look the other way at ritual mutilators such as mohels.

If we must look the other way at Jews mutilating their own, at least for now, then fine.

But like WHAT THE FUCK IS A MOHEL DOING MUTILATING A NON-JEWISH CHILD.

WHY ARE DOCTORS MUTILATING BOYS at the request of people that AREN'T EVEN THEIR PARENTS???

OK, for your OWN CHILDREN. (Even then I think it's wrong.)

But these are children who aren't even YOUR OWN.

These children are yearning to be taken in and loved.

NOT TAKEN IN AND HAVE THEIR GENITALS MUTILATED.

It ought to be a crime for strangers to arrange, facilitate, officiate, and/or otherwise participate in the genital mutilation of a foster child.

This is just wrong on so many levels.

We're not talking about medical necessity here. If a child needs surgery to correct a problem, that's one thing.

But mutilating the genitals of a healthy child as a matter of course for adoption is simply horrific human rights violation.

Forcibly mutilating a healthy child is a horrific human rights violation in and of itself. Full stop.

Letting a stranger mutilate the genitals of their own child is one thing, but arranging this to be done on a child that's not even your own flesh and blood is simply horrific abuse.

I'll fucking own it.

It's bad enough Jews are mutilating their own children, now they have to mutilate the genitals of children that aren't even their own.

I'll say it; Jews who plan on mutilating the children they adopt should not be allowed to.

Those who mutilate foster children ought to face severe punishment.

Without medical or clinical indication, cutting off any part of a child's penis is genital mutilation and a gross violation of his basic human rights.

Could you imagine Muslim parents arranging the genital mutilation of baby girls they adopt?

And don't you come to me with this "female genital mutilation is not a Muslim practice." Yes it fucking is, you just don't want this to be true because you don't want to be put in the same category.

"Sunat" is a practice followed by Muslims in South-East Asian countries such as Malaysia, Indonesia, Brunei and Singapore. Muslims in Egypt and Sudan also have similar practices. It's also a tradition in many African countries.

For better or for worse, female genital mutilation is part of many religions including Islam, and many cultures including cultures from countries I've mentioned above. 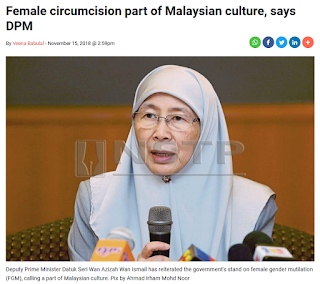 This is reality in the US.

What do we think of parents adopting female children and taking them to have their genitals mutilated by a ritual mutilator straight away?

And this is horrifying.

This is what's next.

We need to stop looking the other way because this is what's coming.

We need to decide right here and now.

The basic human rights of the child?

Or the "religious freedom" of parents wishing to practice their religion on the children they adopt?

What about the child's religious freedom?

"Jewish law also allows those people converted as an infant or child to renounce the conversion when they reach maturity. After girls reach 12 or boys 13, converted infants and children can legally reject the conversion and go back to their previous religion. If they accept Judaism or are silent, they are deemed to be considered adult converts."

THEY CAN'T REJECT THE GENITAL MUTILATION.

THIS IS THE BIGGEST PROBLEM WITH "CONVERTING CHILDREN."

Genital mutilation isn't "for the children." This isn't something the children choose for themselves. The "conversion" is to satisfy an ADULT'S religious requirement.

The poor children are merely tools for adults to fulfill their religious duties.

Which only adds to the whole fucked-uppedness of the situation.

This is wrong in more ways than one.

It is horrifying for me to think about, to imagine poor children who need and want parents to be adopted by parents who want to physically abuse them the first chance they get.

I don't care what prepared dismissive moniker you have for me, this is WRONG and it needs to STOP.

Somebody I know read what I wrote and decided to remind me of this:

There it is in plain sight, and it's just so hard for me to believe.

I wish this weren't so. 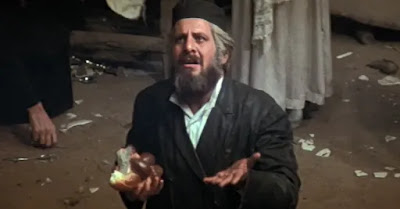 Related Posts:
Intactivism: It's Not Just for Gentiles Anymore