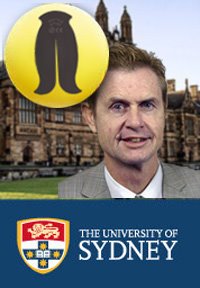 Could it be that ratings are low and Australian news outlets need a controversial story to spice them up? It seems, in these cases, an article promoting circumcision is obligatory, and it never seems to deviate from the usual format. It is usually always something along the lines of "experts say," the "experts" trotted out always being the same usual suspects.

The story always goes something like this: Brian Morris is presented as an "expert" presenting "the latest studies," usually ones written by none other than himself, which tout all the "benefits" of child circumcision. Nothing is ever mentioned about the function of the foreskin, nor the ethical implications of cutting it off in a healthy, non-consenting child. Horrifying statistics that simply fail to correlate with reality are always bandied about, and the audience is warned of the dangers that befall their children if they're not circumcised immediately. The article usually ends on a note of dire warning, indicting the Royal Australasian College of Physicians for not endorsing infant circumcision.

What news outlets usually fail to inform their audience is that Brian Morris is no expert on circumcision, but merely an enthusiastic circumcision fanatic of long standing. He neither holds degrees (nor genuine interests) in surgery, urology, pediatrics, nor epidemiology, and his field of study is only remotely related to medicine. He is in no way an authority on circumcision, much less male genitalia, child care, nor disease prevention. Is there any reason why Australian news outlets don't bother to consult someone who is?

In his latest appearance in the media (the same article with a different name is published again here), Brian Morris, more strongly than ever, indicts the RACP for not taking a stronger stance in favor of male infant circumcision, calling for the ban on non-therapeutic circumcision in public hospitals to be lifted, and for routine infant circumcision to be publicly funded by Medicaid. He does so citing his own "research" as usual, warning of the usual dire consequences that befalls Australians if they don't take their children in to be circumcised.

His latest "report," backed by other circumcision "experts," claims, of all things, that not being circumcised results in a higher risk for prostate cancer. Where on earth is he getting these "statistics" from? Is he not aware that, according to the American Cancer Society, 1 in 6 US men, 80% of whom are circumcised, will get prostate cancer?

In the past, circumcision has been suggested as a way to prevent penile cancer. This was based on studies that reported much lower penile cancer rates among circumcised men than among uncircumcised men. But in many of those studies, the protective effect of circumcision was no longer seen after factors like smegma and phimosis were taken into account.

The rest is the usual pro-circumcision fodder, UTIs, HIV, HPV etc. He, of course, fails to mention that, even if his information were correct (which it is rather questionable),  there would be more effective, less invasive methods of treatment and prevention available. UTI is actually already quite rare in boys, for example, and easily treated with anti-biotics. Condoms would be more effective than circumcision in preventing HIV in BOTH partners, and there are already vaccines for HPV, which, by the way, is easier spread by circumcised, not intact men.

Quite simply, Morris' position is impertinent, and unfounded. The diseases he warns about aren't rampant in countries where circumcision is rare, such as the UK, Japan, Germany, Denmark, AUSTRALIA, etc. As a matter of fact, they're a huge problem in the US, where 80% of US men are already circumcised from birth. America actually has the highest rates of HIV transmission in the industrialized world. The so-called "benefits" of circumcision simply fail to manifest themselves here.

The fact of the matter is that the trend of opinion on routine male circumcision is overwhelmingly negative in industrialized nations. No respected medical board in the world recommends circumcision for infants, not even in the name of HIV prevention. They must all point to the risks, and they must all state that there is no convincing evidence that the benefits outweigh these risks. World medical authorities that agree include the Royal Australasian College of Physicians, American Medical Association, the American Academy of Pediatrics, the American Academy of Family Physicians, the Canadian Paediatric Society, the British Medical Association, and the Royal Dutch Medical Association.

If the best medical authorities in the West have not endorsed infant circumcision, it is because they have reviewed all of the evidence and have found no good reason. Brian Morris is taking an impertinent and unfounded position against the whole of Western medicine. He tarnishes the reputation of the University of Sydney, and Australian news outlets ought to be ashamed for presenting him as any sort of "expert" on the subject.
Posted by Joseph at 10:13 AM