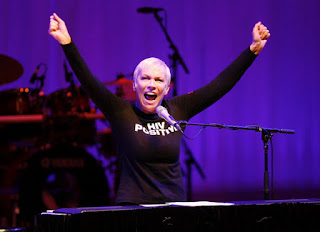 Just a few days ago, Annie Lennox sung at the Hope Rising! "benefit concert" in Toronto, put on by the Stephen Lewis Foundation. This would sound like a noble thing to do, as, at least ostensibly, it benefits AIDS programs in Africa. Why would it be a bad thing to want to help end HIV/AIDS? You'd be a heartless, soulless wretch to be against helping those poor people in Africa.

The problem here is, what is defined as "help?"

And do Africans need or want it?

Annie Lennox is to be commended for putting her celebrity towards a good cause that seeks to end suffering in an unfortunate corner of the globe. Actually, there are a few songs I like for when she sung with the Eurhythmics. But does she know exactly what charities she is supporting? What they stand for?

Who is Stephen Lewis?
Wanting to end HIV/AIDS is a noble cause, but the Stephen Lewis Foundation is founded by none other than Stephen Lewis, whom we intactivists know to be absolutely coo-coo for male circumcision and getting every male in Africa circumcised under guise of HIV transmission.

Here are some things that Lewis has been quoted saying:

In Praise of Paula Donovan of UNICEF
She [ Paula Donovan] realized that male circumcision was a good preventative way to slow the spread of AIDS. So she took that analysis further. She suggested to the male leadership in Nairobi, that UNICEF propose that circumcision accompany the regular process of immunization of infants... Paula was easily 10 years ahead of her time, because that's exactly what's being discussed in several countries now... and what did the UNICEF hierarchy do at the time? They grabbed their genitals in protective embrace and laughed it off like only male sexists can laugh things off. ...the UN took more than a decade to see male circumcision for the inspired preventative technology that it is.

--Lewis, S. (2010, January 06). Male circumcision, part 1. Retrieved
Circumcising Infants to Protect Them from HIV
USAID, UNAIDS and the World Health Organization conducted a fascinating analysis to estimate the value of scaling up circumcision to reach 80% of the adult and newborn male population in 14 African countries by 2015. ...It's really incredible when you think about it, and it's already happening.
--Lewis, S. (2010, January 07). Male circumcision, part 2. Retrieved

Ancient Blood Ritual is a new Technology
The most unexpected and successful preventative technology, which has been chronicled in the last couple of years, is male circumcision.
--Stephen Lewis. Fora, TV. (2008). Stephen Lewis: disease and climate change in Africa.

Stephen Lewis happens to be Jewish; this may be the reason that he thinks of male circumcision, particularly infant circumcision, as "inspired preventive technology."

Note: Thus far, no "researcher" has been able to demonstrably prove that the foreskin facilitates HIV transmission, and that circumcision reduces it.

Not The First Time
Annie might be forgiven for ignorance, if it weren't for the fact that this is the second time she seems to be tacitly lending her support and endorsement for male circumcision as HIV prevention. 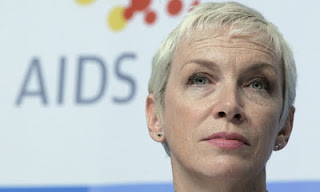 Annie Lennox appeared at the International AIDS Conference in Vienna, 2010, where circumcision as HIV prevention was given heavy promotion. From what I can remember, Michel Sidibe, who had then just barely become the new head of UNAIDS, had given a speech where he praised circumcision as the latest innovation to help fight HIV/AIDS. Another speaker who delivered his speech (I don't remember his name) also mentioned circumcision. Without even questioning what had just gone on, Annie Lennox was trotted out as one of their AIDS/HIV celebrity champions, hounding people for money.

Not in these exact words, but something along these lines, I could remember her saying something like "Take out your wallet. Take out your checkbooks. What did you come here to do? If you're not here to donate, what are you even doing here?" The poor people of Africa are entitled to HIV/AIDS relief (even if it means genital mutilation), and the only thing standing in the way were penny-pinching donors. Maybe she thinks it made her sound sheik, determined and resolute, but to me it just made her look like a bad televangelist trying to guilt people out of their money.

Do Celebrities Actually Care?
At this point, I must ask, are celebrities actually interested in the human rights of the people they are supposedly trying to help?

Or is it all just empty PR and don't care anything further than that being involved in charity, at least superficially, boosts their image?

Is Annie Lennox actually interested in HIV/AIDS prevention? Or is she merely trying to use the HIV/AIDS cause to boost her image and keep from becoming a has-been?

If it were female circumcision the UN was pushing as HIV prevention, would she still be singing at these "benefit concerts?"

The time will come when Annie Lennox, and all who gave their tacit endorsement of male genital mutilation, will be embarrassed to ever admit they did.

Having sung for Stephen Lewis will leave an indelible stain in their careers.

Celebrities, investigate the charities you contribute to.

You may be helping to perpetuate human rights violations on the very people you say you are trying to help, and sooner or later you will be held responsible.
Posted by Joseph at 9:05 PM