Legislation outlawing the ritualized abuse of a child has been introduced in Illinois by one Senator Don Harmon.

It makes a specific exemption for infant genital mutilation:

If he has to write an exception to protect circumcision, what does it say about the practice?

It sounds like Senator Don Harmon is aware of the fact that this law would clearly be applicable to male infant circumcision.

In other words, not even Keemonta Peterson would be prosecutable under the law, because it was a "ceremony." 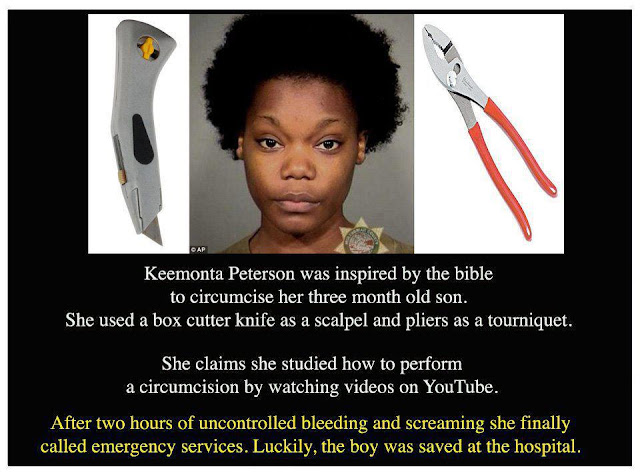 
During hospital circumcisions, babies may or may not be given anesthetic to dull their sensitivity and lessen their pain. (Most are not.) Babies are normally given a little of wine during Jewish circumcisions. Furthermore, all babies, Jewish or not, are circumcised at a time when they will be too young to remember, and cannot fight back.

Circumcision creates a wound on the penis and removes a high concentration of nerve endings that do not exist on the rest of the penis - thus causing sensory and mechanical damage to the genitals. As recently reported by Reuters and many mainstream news media, a recent study shows that circumcision reduces sexual sensitivity. And there have been other reports (see Frisch and Sorrells.)


Can someone still argue that circumcision does not mutilate a human being, a minor, a baby?

Thanks to dreamer for bringing attention to this on his blog.