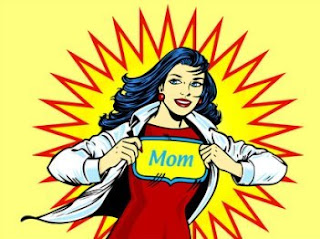 Lately, it seems a lot of "mommy pages" have sought to increase their viewership by bringing on the circumcision debate.

The most reliable way to start a thread that attracts 100+ comments on any parenting page, is to make infant circumcision the topic.

What are "mommy pages?"

Or at least one would hope.


They range from major mainstream online parenting forums, like CafeMom, BabyCenter, Baby Gaga, TheBump, etc., to "mommy pages" on Facebook, where they tend to have cute, but feisty little names like "kickass mommies," "uncensored mommas," or "I'm a mom, I got this."

The names try to give the impressions that they're places for parents to sound off and anything goes.

In reality, though, depending on the nature of the managers of the pages, they're places where the opinions and the nature of pages are already pretty much set, and where you've really got to walk around eggshells, so as to not upset other parents, namely the creators of said pages.

If you've got a dissenting view, you've got to be real careful to couch it, sugar coat it, and coddle others that disagree with you in attempts to get it heard. Dissenting views (or, actually, advice and experiences that upset other parents) tend to be silenced, deleted or blocked as "bashing" or "harassment."

In fact, when a lot of these "mommy pages" dare to bring on the circumcision debate, they always have to preclude, in all capital letters, with expressions such as "NO BASHING!" Or "HARRASSING COMMENTS WILL BE DELETED, AND USERS BANNED IMMEDIATELY!"

Harrassment? Or Inconvenient Truths?
It's interesting what passes for "harassment" nowadays. Yes, I'm sure internet trolls exist in the intactivism movement; they exist in every walk of life.

But, it seems, on "mommy sites," on and off Facebook, any suggestion that circumcision might be a bad idea is considered "bashing" or "harassment," and is often deleted, and the poster blocked, no matter how diplomatic and respectful the comment may actually have been. Sometimes the entire thread is removed altogether, because it's just too much for the admins to handle. Nobody wants to consider the possibility that they may have actually made a mistake. 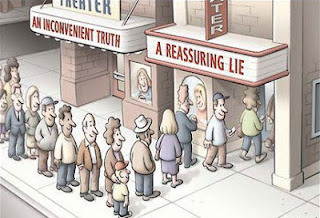 Parents go on these forums which are obviously for the purpose of dispensing and exchanging parental advice, they post their story, asking for every one's opinions, and then cry "bashing" and "harassment" when they don't get the validation they were looking for.

What I find almost comical is the way parents get on their high horse about the matter, and retort with snappy one-liners such as "whether or not I decide to circumcise my kids is none of your business." Or "don't you tell me how to raise my kids."

Another common one is "how dare you assume I don't have the good sense to research the subject for myself!"

Even though, they ARE, for all intents and purposes, seeking advice on a parenting advice forum. Many moms and dads who utter statements as the above also had the audacity to START their own "mommy" page to dispense advice to others. 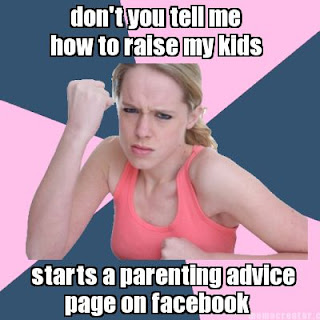 Exchange on most other aspects of parenting (breast feeding, co-sleeping, car seats, slings, etc) is allowed. But anything other than "it's your choice" and "it's harmless and beneficial" regarding circumcision is considered "bashing," "harassment," "disrespectful," and "insulting."

Quite frankly, if parents didn't want to be "harassed" regarding their son's circumcision, why even bring it up? If they're "so confident" and "so informed" on their "decisions," why seek validation on the Internet?

On a parenting forum?

Where millions of viewers can see? 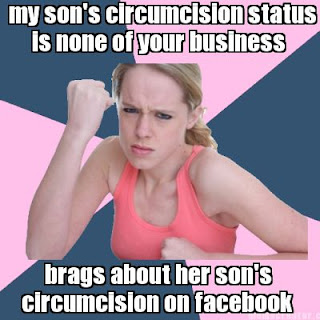 It's rather immature, almost mentally unstable, to be making a post asking for other people's opinions, on an open parenting forum, where millions of other moms and dads can see, and opine, and then call it "bashing" and "harassment" when you don't get the validation you were expecting. It's rather self-contradictory to be posting part of your life on the internet, seeking out others' opinions, and then turn around and say "it's none of your business; don't tell me how to raise my child."

I see a lot more "bashing" and name-calling from defensive moms and dads who circumcised their sons than from those who decided against it. Right after comments against circumcision get deleted, and people are banned, those who remain proceed to speak ill of those who disagreed with them in their absence.

On a side note, I'd like to touch on defensive remarks to the effect of "how dare you think I'm not smart enough to do my own research!" It is impolite to insinuate that a parent is not so bright as to inform themselves on an issue that affects their children. The fact of the matter is, though, that one is not automatically smart and enlightened in child-rearing by mere virtue of being a parent. No parent knows it all. If this were true, then there wouldn't be a need for parenting forums and mommy pages.

The fact of the matter is, however, that no respected medical organization endorses male infant circumcision. The AAP tried to in their last statement, but stopped short. All medical organizations in the West state that the current body of evidence is insufficient to recommend the circumcision of infants. It is fallacious to expect lay parents to examine the same body of evidence, and come up with a more reasonable conclusion than that of entire organizations of medical professionals. It is not possible, then, that parents who chose to allow their children to be circumcised "did their research."

It is medically fraudulent that parents are being allowed to make a "choice" that is inconsistent with the conclusions of entire organizations of medical professionals, that doctors pretend that they can comply with such a "choice," and that public coffers are expected to reimburse them.

A Disservice to Parents and Their Children
Why do page admins delete "bashing" and "harassment" on their pages and forums? (In other words, factual information that may make other parents uncomfortable?) My theory is that, a lot of them are more interested in being the center of an online parenting forum than they are about dispensing factually accurate information. They aim to people please and earn and keep "likes" on their pages.

Deleting posts that upset parents who have made the irreversible decision to circumcise their sons makes you look like a hero.

What good is a parenting or "mommy" forum, where basically, instead of advice or exchange of accurate information, its people giving each other validation and reassurance?

The problem with only allowing "supportive," feel-good posts that pander to circumcising parents, and deleting factual information as "bashing," "harassment" and whatnot, is that a lot of misinformation is circulated.

Myths are spread, and children suffer as a result.

Stifling the circumcision debate may keep parents from getting upset and boost online egos, but it doesn't help anybody.

For example, it is accepted medical knowledge that you don't forcibly retract a child's foreskin "for cleaning." Research shows that the foreskin often remains non-retractable until, and even after the onset of puberty. These actions actually hurt your child and put him at risk for infection.

And yet "mommy sites" will often delete this very important information as "bashing" and "harassment," however respectfully presented, and will allow misinformative posts that "warn" parents who do not circumcise their children that they will have to forcibly retract their children to "clean."

As more and more parents are choosing to keep their children's genitals intact, the proper care of normal genitals is important information that parents need to be made aware of, if they don't want to inadvertently hurt their child.

Deleting factual information as "bashing" and "harassment," and blocking the users which disseminate it might spare parents who circumcised their children anxiety, but it doesn't help parents who are seeking to make an informed choice, or their children, totally defeating the purpose of a parenting website.

A Sign of Progress
It's rather self-serving the way "mommy site" admins want to take advantage of the circumcision debate to boost their viewership and "likes" on Facebook, but don't want to actually allow true debate, accusing users that make good points of "bashing" and "harassment," however polite they were, for the sake of popularity.

This seems to be working in favor of intactivism, though.

It used to be the case (and in many cases still is the case) that the circumcision conversation was strictly off limits, and people wanted the conversation to end full stop.

That "mommy sites" now want to host the circumcision debate as an attention booster, even with heavy editing and accusations of "bashing" and "harassment" is truly a sign of the times.

Moms and dads are being forced to come to the table talk about, and consider an issue they once hoped would be a bygone parenting "decision," like deciding what brand of diapers or wet tissues to use.

People are talking, which means circumcision is no longer this taboo "non-issue" you can slide underneath the carpet and pretend never existed.

Some mommy sites actually aren't that bad, and allow links and posts that polite and informative. On the whole though, there's a lot of sugar-coating and coddling of circumcising parents going on.

You can ban people and delete comments you don't agree with, but the circumcision debate is here and it's not going to go away.


Moral of the story:

"When you ask for advice on the Internet, don't call it "bashing" because it's not what you want to hear."

"If you didn't want it, then you shouldn't have brought it."