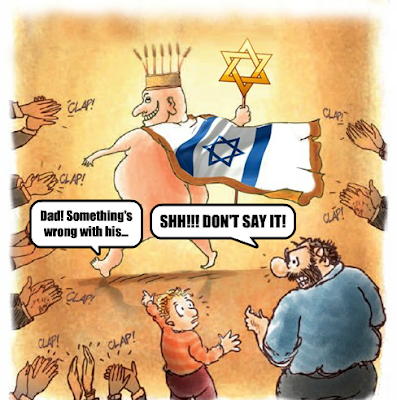 The Council of Europe has declared the medically unnecessary circumcision of non-consenting minors to be a human rights violation and the responses have been predictable, from accusations of anti-Semitism by leaders of Jewish groups, to the Israeli president Shimon Peres sending a letter to Council of Europe Secretary General Thorbjorn Jagland, asking for his intervention. Knesset Immigration, Absorption and Diaspora Committee chairman Yoel Rozvozov has proposed that Jewish circumcision ceremonies be conducted at Israeli embassies.

Up until now, Europeans, and perhaps most everyone else, have refrained from questioning circumcision. Even today, leaders and politicians have a tendency to pussyfoot around the issue. The politically correct thing to do is to either join the chorus and sing the praises of the "medical benefits" of circumcision, the only recourse being to simply circumvent the issue and hope it goes away.

In a recent post, one can see that Israel has Europe by the thick and curlies. In the past, any discussion questioning the ethics of forcibly circumcising, healthy, non-consenting minors could be abruptly truncated by having a Jewish person stomp, pout, point their finger and say "anti-Semite." These actions still have a similar effect, as one can clearly see Jagland pandering to Israeli president Shimon Peres, after having received a personal letter directly from him.

All arguments questioning the circumcision of minors, how ever well-reasoned, are trumped by the "anti-Semite" trump card.

How far is this to continue?

When can Europeans, and the world in general, expect to freely discuss the ethics of forcibly circumcising healthy, non-consenting minors?

Or are Europeans and the rest of the world to continue turning a blind eye and refuse to call it the mutilation and basic human rights violation that it is, in order to avoid political assassination?
Posted by Joseph at 5:26 AM