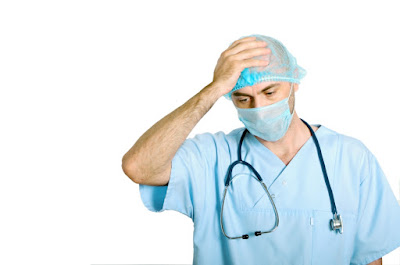 Circumcision horror stories are common on Facebook, it's too bad they never make mainstream media. I can only imagine what we do see is only a tip of the iceberg.

This was on my Facebook news feed just a few days ago: 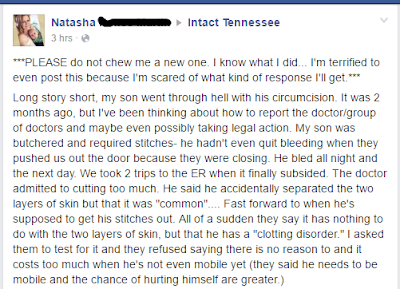 Children bleeding uncontrollably is the most common story I see, usually a mother asking for "prayers" because her baby "won't stop bleeding."

In Africa, where circumcision is being pushed as a "safe" HIV "prevention", a 14-yo boy has died during the procedure.

And, as usual, his parents and others are trying to blame something else.

Read a news article about it here.

The fact of the matter is this; the child was alive and otherwise perfectly healthy, and not in need of surgery.

The "benefits" the surgery was supposed to give him were already affordable by less invasive, more effective means.

Had he not undergone this needles surgery, the child would still be alive.

This happened at a hospital setting; yearly, scores of African boys undergoing tribal initiation rites die following their circumcisions. Still others lose their penises to gangrene; others commit suicide.

The risks of circumcision include infection, partial or full ablation, hemorrhaging and even death.

Given that male infant circumcision is elective, non-medical surgery, how is it conscionable that healthy, non-consenting minors are being put at these risks?

How is it concsionable that any number of botches, complications and deaths is deemed "acceptable?"

When are respected medical authorities going to recognize the forced circumcision of healthy, non-consenting minors for the needless, harmful, deadly, abuse and violation of basic human rights it is?

Phony Phimosis: How American Doctors Get Away With Medical Fraud
Posted by Joseph at 6:56 AM