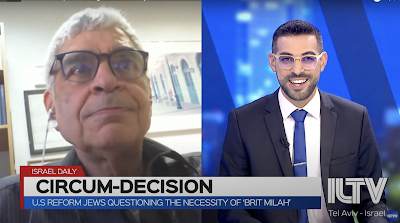 Well, as a goy (what racist Jews call non-Jews), I would think it would be as simple as, if your parents are Jewish, then you're Jewish too.

If your dad is white and your mom is Chinese, then you're half white and half Chinese. You have double-heritage.

If your dad is Jewish and your mom isn't, or vice-versa, then you're at least half-Jewish.

But of course, it isn't as simple as that.

Being Jewish, it seems, is more than just being born to parents who are descendants of one of the twelve tribes of Israel.

Is Jewish a religion or is it an ethnic group?

At one point it used to be one and the same; people who were Jewish followed Judaism, but nowadays things aren't so clear cut, pardon the pun.

If I'm following correctly, anyone can convert now.

If you're male, go get circumcised by a rabbi (EECH.), get his blessing and you're Jewish now.

If you're a woman, a rabbi blesses you and you're now Jewish.

And therefore your children are Jewish, if we look at Halakhic law.

Pardon my racism, but this creates a whole ethnic mess.

It muddies the waters.

In any other case you can't just be "blessed" into an ethnicity.

No matter how hard I try, I can never be Irish. Or Danish. Or Chinese. I am who I am.

My DNA makeup is what it is, and there is nothing I can do to change this, so it is difficult for me to conceive of just anyone "converting" to Judaism, "becoming" a Jew.

I'm not Jewish, I can't speak, really, but in MY book, someone who is "truly" Jewish can trace their lineage to, well, actual Jews.

My goyism aside, it's refreshing to see an actual rabbi from Israel setting the record straight.

I just saw the following video on Facebook and I thought it was relevant to share here:

Rabbi Andrew Sacks, Director of the Rabbinical Assembly of the Conservative movement in Israel says that there is no question that Jewish males who have not been circumcised are fully Jewish and, further, they can participate fully in synagogue and ritual life, including bar mitzvah.

Sacks reiterates what I've always known; that a person is Jewish by virtue of having a Jewish mother.

(Does this include converts? Can a Japanese couple suddenly birth a Jewish baby if the mother decides to convert to Judaism?)

I appreciate the inclusion, but the man is still adamant that the "tradition" be continued.

Furthermore, he comments on what I am almost certain is not his area of expertise; he's a rabbi. Why is he commenting on "medical benefits?" "Benefits" that are contested and fail to manifest in the United States where we have the highest rates of STDs, including HIV, even though 80% of male are circumcised from birth?

But hey, at the very least Brit Shalom and the existence of intact Jewish males is being  acknowledged.