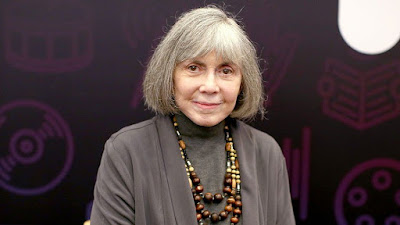 Recently I ran across news that Anne Rice has finally kicked the bucket at 80.

I couldn't stand how she threw children and men under the bus to pander to her feminist base and boost her book sales.

As more advocates of male genital mutilation croak, the world becomes a better place for current and future generations.

Fuck anyone who insists on continuing to push the false narrative that "male and female circumcision aren't the same" and that men have all the attention when it comes to genital mutilation and that men attempt to "shove women to the back of the bus" in this regard.

It's feminists and anti-female genital mutilation activists and organizations that hog the limelight and piss on the rights of boys and men.

To push the narrative that "men bring up male circumcision while women suffering genital mutilation struggle to find a voice" as countless organizations dedicate themselves to raise awareness of FGM in Africa as they ignore boys and men who die in circumcision initiation rituals has got to be the ultimate misandrist grift.

Ding dong the witch is dead.

I can't wait until all willfully ignorant advocates of male genital mutilation die out.

Then the world will be a better place for ALL.