I am sad, angry and devastated to have found out that Jonathon Conte took his own life on May 9th, this year in 2016.

For a long time now, Jonathon fought at the front lines against the cold, hard machine that is the systemized genital mutilation of healthy, non-consenting minors.

He not only participated in protests at AAP conferences and other venues, he helped at information booths trying to educate people on the subject of the forced genital cutting of minors. 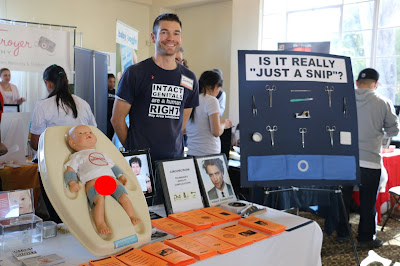 He was a member of the Bay Area Intactivists group, which is a human rights organization comprised of community members who are working to end forced genital modification.

Why did Jonathon Conte take his own life?

I think when reading the words he said when he was alive, it becomes clear:

"As a child, I grew up believing that my body was whole. I grew up assuming that my penis looked and worked the same as any other. I grew up thinking that the scar on my genitals was just a natural part of my body and that all men had it. I grew up figuring that the soreness brought on by clothing and masturbation were normal aspects of being a guy. I never questioned why so many types of underwear were painful, I only found it strange that anyone could manage to wear them. I was about 14 years old when I learned that part of my penis had been cut off. It seems like this is something that one might realize earlier in life and yet I never did. I was never taught about normal male anatomy and no one ever explained to me that I had undergone genital surgery as an infant. When I learned the devastating truth, my stomach sank and my throat closed up. It wasn't easy for me to accept reality. Even though I understood that part of my body had been removed, I was in denial about the implications of this fact. I battled with depression, particularly whenever I had to see my penis. Each time that I got undressed to take a shower, I would see the scar and I would be reminded of what was stolen from me. Each time that I urinated, I would be reminded that I would never know how my body was meant to look and how my body was meant to feel. I felt violated and helpless. I felt embarrassed and angry. I felt robbed and betrayed. I felt incomplete and damaged. And yet, I was incapable of verbalizing any of this. I was paralyzed by embarrassment of my condition and by fear that others would neither understand nor sympathize. It took over a decade of trying to cope with my emotions before I gained the strength to take a closer look at the issue. I read about the functions of the intact penis. I studied the numerous physical, physiological and psychological problems that result from male circumcision and I began to recognize many of them in my own life. I learned of the way that babies are restrained during the surgery and the various techniques that are used to rip, clamp, crush, and cut their tiny bodies. I came to understand the greed, arrogance, and ignorance that perpetuates the genital mutilation of children... So now I speak out. Because I don't want any other child to have to make the same painful discovery that I did: That they were denied their human right to keep the whole body with which they were born." 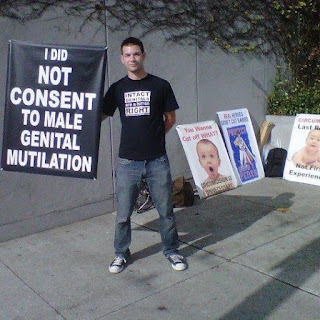 I am not a circumcised male, but for whatever reason, I think I can understand what Jonathon was talking about. My thoughts are a mirror-image of what Jonathon had felt.

I must have been about 15 or 16 when I really gave male infant circumcision consideration, and I remember thinking it was wrong and unfair.

I saw it as a permanent physical abuse, a robbery that males had to live with for the rest of their lives.

I thought that everyone's penis worked the same way.

I thought that not having a foreskin, having a permanently exposed, dried-out head was a physical, genetic trait.

Some guys, that's just how they're born, like being born black, or without earlobes, or with a short nose, or a double-chin...

When I learned the devastating truth, that some men look the way they do because someone deliberately took a knife and forcibly cut off part of their penises, I was devastated.

I covered my crotch with both hands and cringed in horror.

Having been born and raised in the US, I felt lucky.

Whenever I look in the mirror, I'm reminded of the horror and the mutilation that I was spared as a child.

No, not privilege, this BASIC HUMAN RIGHT.

When I first learned about this, I tried with all my might to normalize male infant circumcision.

"It's OK, they don't even remember," I tried to say to myself.

"Well, that's what Jews have been doing for thousands of years," I heard myself say again.

"Well, it's what parents want, and who am I to judge?" I kept saying.

My whole life as an intactivist has been me trying to justify the forced genital cutting of minors who can't speak for themselves.

Every time I feel I've finally found the perfect alibi, it vanishes before my eyes, and I'm left again at square one:

How is it right to take a child who has just been born, and forcibly cut off part of his most sensitive, most intimate area?

How is it right to make a man live with a permanent physical modification for the rest of his life?

How is it conscionable to put a healthy child at risk for infection, partial or full ablation of the shaft, hemorrhage and even death?

Which leaves him permanently scarred for life? 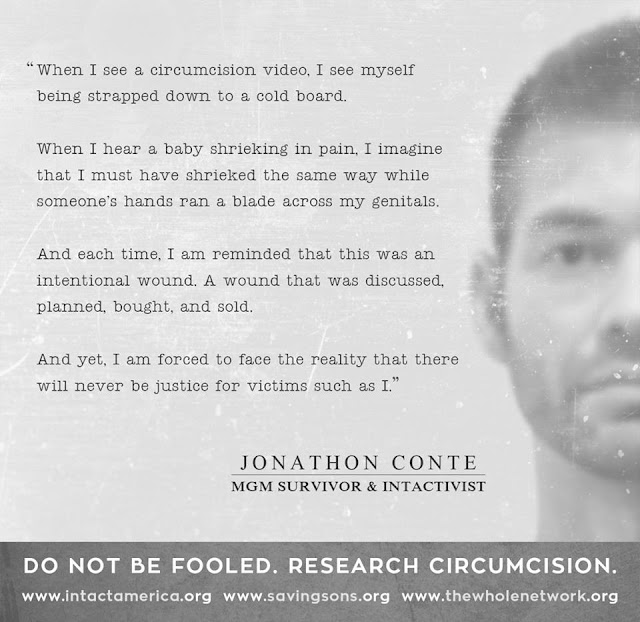 Whenever I see a circumcision video, a picture of a child being forcibly mutilated, I see myself being strapped, held down.

Whenever I hear a baby shrieking in pain, I imagine what I might have sounded like had I been put through that same predicament.

Every day I live with the reality that this happens hundreds of times each day in my country. 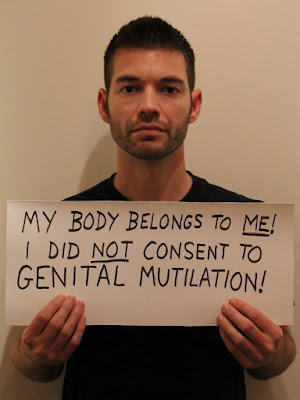 If you do not own your own body, just what do you own in this world?

Perhaps facing this pain, this mutilation, this reality, this life sentence, this inevitability is the reason circumcised men often would rather not think about what happened to them?

Perhaps this is the reason they would rather rationalize and normalize it, rather than to question it and face it head on?

Perhaps this is why rather than question it, they would rather pretend it's "normal?"

Perhaps this is why they'd rather think "I don't even remember it?"

Because to question it means that they would have to consider that something very wrong and irreversible has happened to them?

That they have to consider that their parents, the people that up until this point they have trusted and loved unconditionally, have allowed others to permanently harm them?

That they have to consider they have allowed this same thing to happen to their own children?

Who wants to live with something this heavy for life?

I'm not even circumcised, but I, for one, find it difficult to live life in a world where male genital mutilation is considered "normal" for boys, but "abuse and mutilation" for girls.

A world where men have to live with the "normalcy" of having to live with permanent "choice" on their bodies they never opted for and be forced to call it "privilege."

A world where the state can mandate the forced genital mutilation of healthy, non-concenting children.

A world where it's "religion," "tradition" and "parental prerogative" to cut the genitals of boys, but "mutilation and abuse" for girls.

A world with a two-track system sexist double-standards.

A world where "my body, my choice" applies only if you happen to be born female.

A world where you are told your feelings of anger are invalid...

A world where you are told to be silent...

Because it makes them feel uncomfortable...

Because they don't want to have to think about it...

Because they don't want to have to explain it to their own children...

Because they don't want to have difficult conversations with their own parents...

A world where you are dismissed as being "crazy" or "out there" for having these feelings...

For daring to express them...

I'm not even circumcised, but at times I have felt the weight of this reality to be so heavy that walking out in front of a train wouldn't be such a bad idea.

Sometimes at night, I lay in bed, there next to my wife, in the fetal position, with my hands between my crotch, rocking back and forth, with tears streaming down my cheeks, feeling helpless, thinking to myself, "Had I been forcibly circumcised as a child, short of protesting, kicking and throwing a fit, there would be basically nothing I could do."

I would have to learn to live with the fact I was abused at birth.

I would have to learn to live with the fact that my parents allowed it.

I would have to learn to live with the fact that doing this to male, but not female children, is legal and perfectly acceptable in my country.

I would have to learn to live with the fact that doctors can legally reap profit from this, performing non-medical surgery on healthy, non-consenting individual.

I would have to learn to live with the fact that part of my penis went into paying someone else's Mercedes Benz or Porche.

I would have to learn to live with the fact that leaders in my country are trying to push this practice on other countries under the guise of "STD prevention."

I would have to live with a scar around my penis for the rest of my life to remind me of all of this.

To remind me that my body isn't mine.

Every time I used the restroom.

Every time I took a shower.

Every time I touched myself.

Or every time someone touched me.

Every time I'd look in the mirror I'd be reminded.

That my body isn't mine.

Because it was stolen from me.

I'd have to live with this for the rest of my life.

I'd have to live with people telling me "Get over it."

"It was such a long time ago."

It is plain to see that for Jonathon, it was too much to bear.

Jonathon Conte died peacefully on May 9th, 2016 between noon and 8pm quickly and painlessly by inhaling helium. In a final act of intactivism he left his trailer with signs somewhere in San Francisco.

... we will remember you as we fight on every day for the most basic of human rights... 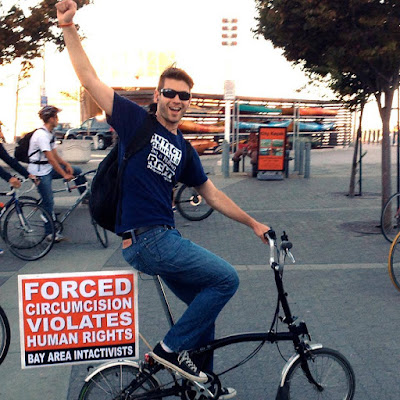