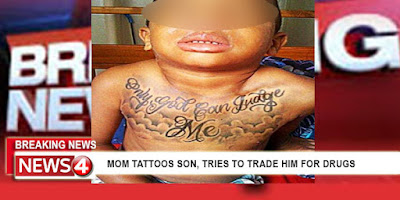 And why shouldn't she be able to?

Her son, her prerogative right?

She had someone cut off part of his genitals, but she can't have someone tattoo him?

Parents have less and less rights these days...

That's all I'm going to say about this.

Here's the article and link:

A manhunt for 24 year old Shaunetta Wright came to a peaceful end early Monday morning after she was apprehended in Alabama for child abuse, neglect and several other charges. Authorities say that Wright is accused of allowing her boyfriend to etch a full chest tattoo across her two-year-old son’s upper torso and then trading the boy for crack cocaine.

According to reports, Wright approach her drug dealer with her son Monday morning around 2:15 AM. The boy was upset, crying and in a lot of pain as she showed off his new ink. Her drug dealer, 34-year-old Tito Greene says she approached him for crack cocaine, but said she had no money. She offered him the injured child for collateral until her welfare check came in on the first of the month. Greene, who is in custody and currently being questioned on the ordeal, said he agreed to take the boy and gave Wright her drugs.

“I know I’m a drug dealer but I do have a heart,” said Greene in his confession to the police. “I gave her the drugs and took the boy into the house. We applied some Neosporin to his chest and an ice pack to try to calm him down. I knew I was going to be in trouble, but I had no choice to call the police and get this kid some help.”

A manhunt for Wright began, and she was apprehended in a dingy motel just 2 miles from the exchange. Greene is facing charges of drug possession, however, police are considering a lighter penalty because of his heroic actions. The child is currently in custody of Child Protective Services. Wright is being held in the county jail on no bond. They are still searching for the boyfriend, 23-year-old Oscar Williams, who illegally tattooed the child.

The boyfriend is a fugitive on the run.

So should it be with all who forcibly circumcise healthy, non-consenting minors.