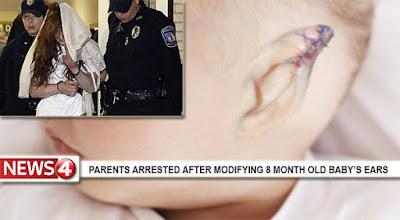 I don't want to say too much about this.

I have already spent enough time writing my previous post.

I'm just going to re-post the news article verbatim and give a commentary at the end.

Las Vegas, NV –  A Las Vegas mom was arrested on Tuesday after an acquaintance called the police saying that the mother was doing body modifications on the child. 19-year-old Tonya Creighton says she was just trying to make her daughter look “cool” and meant no harm to the baby. Child Protective Services was called to the scene and the baby was removed from Creighton and put in their custody.

According to the anonymous tip made by Creighton’s acquaintance, the mother and the baby’s father, 22-year-old Brian Shekel gave the baby Benadryl to calm her down and applied a numbing agent to her ears. They then began the “Ear Pointing” surgery on the child, which is usually performed by a plastic surgeon at a cost of around $3000. According to the parents confession, they knew they would find no plastic surgeon willing to do it to the child and they “could not afford it because they had no jobs and their only income is welfare.”

“I don’t see what the big deal is,” said Creighton in her statement to the police. “That’s my child and I should have the right to do whatever I want to do with her. There was no harm done and everybody is doing it anyway and it looks cool. Our friend up the street did our ears and we didn’t need no plastic surgeon. It’s a family trait, and we wanted our daughter to have it.”

Doctors say the reversal will be very difficult. However, reconstructive surgeons in the area have volunteered to fix the child’s ears at no charge. Both parents are being held in the county jail on no bond. They are facing charges of child abuse, child endangerment, and performing a surgical procedure without a license.


The mother is right, you know.

Her child, her choice.

Besides, she wants her daughter to look like her and daddy, right?


"Religious Freedom" and "Parental Choice" Not Absolute: Yet Another Example
"Religious freedom?" "Parental choice?" or "Child Abuse?"
INTACTIVISTS: Why We Concern Ourselves
The Circumcision Blame Game
Pageant Mom Loses 8yo Daughter Over Botox


Botox bill yes, circumcision bill no?
Posted by Joseph at 7:47 AM