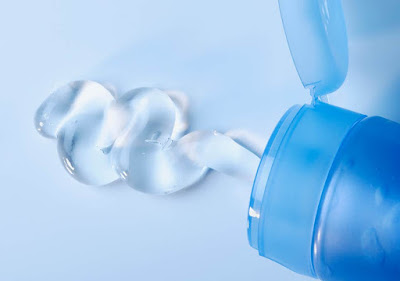 Well, No Nut November 2019 is finally over, and so was a last-minute Twitter poll I conducted for the occasion.

For this poll, I asked male respondents for two, basic pieces of information.

At any rate, it is what it is, and now I give you the results. 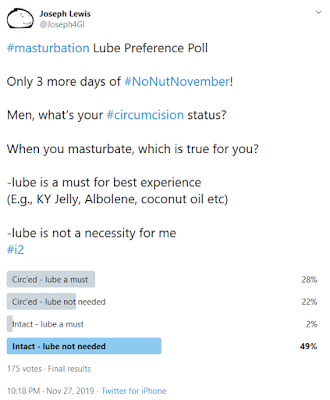 It is noteworthy that, so far this has been the most popular poll I've conducted so far! 175 votes! You can see the results to other polls I've conducted if you scroll all the way down to the bottom of this post.

Notice those percentage points; respondents were more or less 50/50 in circumcision status, with half of the respondents being circumcised and half being intact.

Again, I probably could have rephrased this question; it could be a lot of the "not needed" guys still actually use lubrication on a regular basis (this is actually what I need to know), they just indicated that it was "not needed."

That's what I want to know.

And if these numbers are any indication, it looks like circumcised men are more likely to be lube users.

Look at the circumcised and intact "lube is a must" bars: stark difference.

Here is another consideration for this poll:

Some men are circumcised more loosely, or more tightly than others.

Unfortunately Twitter polls are rather limited and there is only so much data that can be asked for.

The original poll can be seen below:

Only 3 more days of #NoNutNovember! 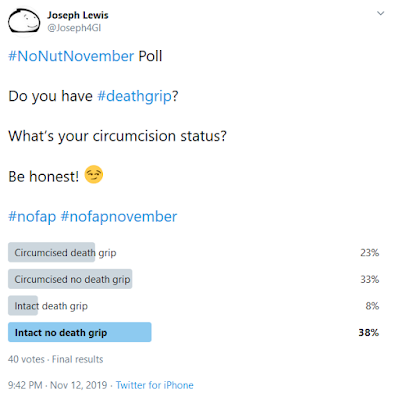 The original poll can also be accessed here:

Finally, I'd like to close by saying that these polls are in no way as definitive as rigorous peer-reviewed study would be. I admit that they are casual, just for fun, and that further study is needed. Hopefully actual researchers will see these polls and use them as a starting point.

Twitter "Circumcision Status and Death Grip" Poll Results
Posted by Joseph at 9:12 AM