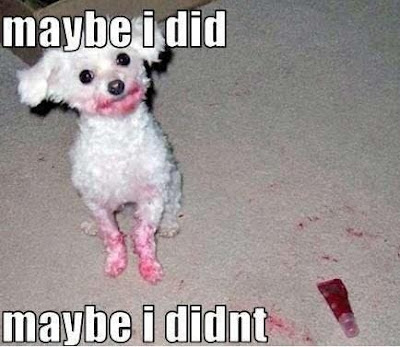 The number of reported cases of babies contracting herpes following their circumcisions, where ultra-orthodox mohels practice the obscure tradition of using their mouths to suck a child's freshly circumcised penis to "cleanse the wound," (AKA "metzitzah b'peh") has been increasing. Just the other day two more such cases made the news, and it is alleged that New York City hospitals and the city’s Department of Health are suppressing disclosure of even more cases.

But mohels putting their mouths on the wounded penises of children is not a health risk, claims Jewish group Agudath Israel of America , who has been fighting tooth and nail to get a new law requiring mohels report the risks of their practice to parents repealed. (They have been, as of yet, unsuccessful.) The law is basically worthless, as there aren't any real penalties, and it holds no one responsible, but the group wants it repealed anyway.

Agudath wants the New York law repealed, and this time, they've got "scientific evidence" to "prove" their tradition doesn't put children in any danger.

Well, at least the danger of herpes transmission.

Agudath has issued a press release lauding a study which they hope will vindicate a practice of what would otherwise constitute as neonatal pedophilia in other cases.

I find it rather comical that a religious group wants to vindicate a tradition with "research" ("religious freedom," it seems, is in itself, insufficient) as if the outcome of any "study" determines whether or not an act is morally justified; the act of slicing the penis of a healthy, non-consenting newborn is already sufficiently morally repugnant.

What do the outcomes of any "study" matter to people of faith anyway? Would Agudath seriously stop practicing their ritual had their "study" produced unfavorable results? I highly doubt it. Ultra-orthodox mohels continue to practice the act in spite of new regulations as it is. The infected babies are the evidence.

But Agudath continues to try and make the case that although babies have contracted herpes, their cherished tradition has absolutely nothing to do with it, the evidence and other research be damned.

They've got the "scientific proof," which I'm sure was conducted neutrally, and dispassionately, without any particular political goal in mind.

I've taken the liberty of taking some relevant excerpts in the latest press release and taking them apart, right here on this blog.

Adugath Israel of America Appeals to "Research"
Reads the title of the press release:


It appears "casting doubt" was the sole purpose of the "study," which I have a hard time believing is "independent." I'm sure Agudath has absolutely nothing to do with it.


"In a study published in December last year, University of Pennsylvania's Center for Evidence-based Practice reviewed several studies linking circumcision with oral suction, a common ritual for many Orthodox Jews, and herpes simplex virus (HSV) type 1. Though four published studies since 2000 suggested that such a link does exist, Penn doctors found the evidence to be 'small and significantly limited.'"


What do they posit is the cause for male babies contracting herpes following the ritual?

Who are the "doctors," and have they been investigated for potential conflict of interest? (IE, are they ultra-orthodox Jews who engage in the traditional practice? Are they in any way tied to Agudath?)

I keep hearing the word "evidence-based" thrown around, but that seems to mean a practice is justified as long as you have some sort of "study" that says it's OK.


And what, pray tell, does religious ritual have to do with medical practice?


Four studies have been published since 2000 suggesting a link between a person putting his mouth on the wounded penis of a neonate is a risk for herpes transmission, but this one sets them all straight.

It doesn't seem to help by suggesting a causal link of its own though.

"The study was cited in an appeal filed Monday in the U.S. Second Circuit Court of Appeals challenging a New York City Department of Health (DOH) regulation that seeks to place limits on the practice.

'We have been saying for years that the evidence attacking this religious practice is highly dubious, and now we have world class doctors agreeing with us,' said Rabbi Gedaliah Weinberger, chairman emeritus of the board of trustees of Agudath Israel of America, a party in the suit."


Moral and ethical questions are moot as long as you have some sort of "study," it seems. But this reasoning doesn't always work.


"'We have been saying for years that the evidence attacking this religious practice is highly dubious, and now we have world class doctors agreeing with us,' said Rabbi Gedaliah Weinberger, chairman emeritus of the board of trustees of Agudath Israel of America, a party in the suit."


Argumentum ad verecundiam; we don the white coat of science, therefore we are correct.

"'Hard scientific evidence simply does not back up the alarmist efforts of the New York City Board of Health and others who are needlessly interfering with the fundamental constitutional rights of thousands of New Yorkers.'"

At least ONE study doesn't back it up, and it's "hardness" is questionable.

"In the Penn study, the center explains that the evidence base is substantially limited by several factors. First, the number of events - some that date back to the 1980s - is too small to establish a causal relationship."


The number of reported events is small.

But most importantly, is a large number of events needed to establish a causal relationship when the causal link is clear?

How many babies must die in order to prove that they will drown if you hold their heads underwater for too long? Or that putting a plastic bag over a child's head will result in asphixiation?

"Second, the way the cases were reported led to many questions about their validity."


We are not given an example.

"Third, important information about some of the cases is unknown, specifically the infection status of the mothers, which suggests that the disease could have been transmitted in other ways."

Here, the "researchers" are attempting to place the onus on the PARENTS, while absolving the mohels.

And what about the important information that is known?

For example, the fact that at least one mohel that engages in the practice of oral suction of a wounded child's penis, one  Yitzchok Fischer by name, tested positive for herpes? And that three other children that he circumcised contracted herpes? One of whom died?


"'This evidence has important limitations. The total number of cases is very small and was distributed across three countries and a fifteen year time frame. As with all case reports, they were identified and selected in a non-systematic manner and cannot be compared with a specific control group,' the Penn review said in reaction to one particular study."

1.3 million gentile boys are circumcised yearly in this country.

How many contract herpes via their mother?

How many contract herpes, period?


"Last year, the DOH passed a regulation requiring rabbis, as a condition of performing MBP, to inform parents that the DOH advises that MBP 'should not be performed' because of its alleged risks, and to obtain the parents' signed consent. The regulation thus expressly seeks to deter New Yorkers from participating in this religious practice."

But, as indicated by two recent reported cases, the law is basically worthless; an attempt by the DOH to look busy while shirking responsibility.


"Several rabbis and Jewish groups later filed suit, arguing that the DOH regulation violates both the U.S. and the New York State constitutions. By forcing rabbis to communicate the DOH's subjective advice that MBP should not be performed, along with equally subjective views about unproven health risks, the DOH is imposing its own beliefs on others and violating the rights of the rabbis."

Nevermind the beliefs imposed on a healthy, non-consenting child by permanently disfiguring his penis.


"Moreover, the suit casts doubt on the DOH's contention that undisputed medical facts show that MBP poses a risk, a contention now further undermined by the independent Penn study."

"The Department of Health would have the public believe there is an epidemic going on, which is not only untrue but irresponsible," said Dr. Brenda Breuer, PH.D., M.P.H., an expert witness in the case."


Straw-man argument; the Department of Health is not trying to convince the public that there is any kind of "epidemic," going on, but is trying to respond to the fact that many babies have been infected with herpes following traditional circumcisions that involved the practice of the oral suction of freshly circumcised babies by rabbis.


"This is a procedure the Jewish community has been performing for thousands of years without an issue, and that has not suddenly changed in the last ten years."

What has changed, however, is people's willingness to keep deaths due to circumcision secret.

And, no, while the practice of brit milah may have been around for millennia, the practice of oral suction of the fresh circumcision wound of a newborn, AKA "metzitzah b'peh" is actually a relatively recent practice. (A good reference on how the circumcision as practiced by Jews has evolved over time is "Marked in Your Flesh," by Jewish anthropologist Leonard Glick.)


Conclusion
If the practice of placing one's mouth on the circumcision wounds of children isn't transmitting the herpes virus to them, then what is?

It seems vindicating what some view as a cherished tradition was more important than actually determining how exactly children are contracting herpes.

This "study" doesn't sound very scientific at all.

How are babies contracting herpes?

Aren't a mohel that tests positive for herpes, and the fact that the lesions appear around the child's genital area enough proof to conclude that the virus was transmitted via this practice?

This doesn't seem to be a concern of the "researchers" or of Agudath.

Perhaps the practice of metzitzah b'peh hasn't changed in the last 10 years, but the act of keeping silent about these matters has. Just because people were failing to report these cases, does not mean that they weren't happening, it just means that 10 years ago, people were more willing to keep silent about these matters, and the times have changed.

We'll be hearing about how the practice of Metzitzah B'peh reduces the risk of cancer and HIV transmission next...