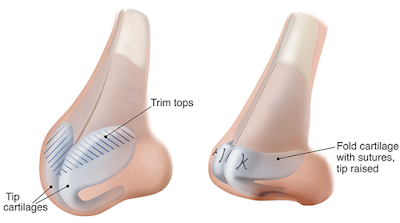 So I was scrolling down my Facebook news feed, when I notice that someone had shared an interesting post about a hypothetical scenario comparing male infant circumcision and rhinoplasty.

This shouldn't be too surprising; I have a lot of intactivist friends that post and/share intactivist posts, news articles and memes all the time.

The peculiar thing about this one particular share was that it was done by a friend who I least suspected would ever share such a thing.

We had discussed male infant circumcision on other occasions, and although she wasn't a militant pro-circumcision advocate, she lead on that she believed that circumcision was a parent's choice, and wasn't too keen on the idea of challenging what is known to be a fairly common procedure and taking away that "choice."

Well, when I saw that this friend shared the story you are about to read, I was grinning from ear to ear.

I'm glad to know that at least one more person I know has come to not only question male infant circumcision, but also to share posts like these and spread awareness among her circle of friends.

Could it be that our previous conversation made a difference?

In the interest of privacy, I'm not going to name any names, but I just wanted to share the story my friend re-posted on my blog.

So, I took my newborn in for a nose-job…

and his pediatrician flipped out on me. Can you freaking believe it?!?!

I told her that his nose looked different than my husband’s, and I’d like them to look the same. This should avoid any awkward questions when he’s older. The doc looked at me like I was insane and told me that was no reason to perform elective surgery on a neonate.

I told her that the girls would probably like him better when he started dating if he had a nose-job. Again, baffled, the doctor told me that she could not, and would not, perform cosmetic surgery on a newborn for such a ridiculous reason.

I told the doc that I had heard a rumor that my son would be less likely to get rhinitis later in life if we removed a little of his schnozola. Starting to show a little concern for my parenting, she told me that there was no conclusive evidence to support elective surgery as a means of effectively preventing complications or infection in adulthood.

Starting to get impatient, I told her that I just wanted to get this over with. After all, my son would probably decide later in life that he’d like a designer nose, so it was better to just have it done now while he was too little to remember, and probably couldn't feel it anyway. Looking at me like I was bonkers, she asked me what made me think that this perfectly formed little person wasn’t capable of feeling pain. Hadn’t he shrieked when he had a tiny pin-prick to draw blood from his heel? Of course he could feel pain!

I told her that I thought it would be easier for him to keep his nose clean if we just took a tiny bit off. I could see the doc making a mental note to call child protective services on my crazy ass, but she humored me and explained that it’s very easy to teach a child how to properly clean his nose.

I told her that I was afraid that years later, all of his friends at school might have a certain kind of nose, and that he would be ridiculed. The doctor told me that everyone’s nose is different, and that she would not be performing elective surgery on a newborn for such an asinine reason.

I told her that I heard that lots of people were having their newborns’ noses done. She didn’t even have an answer for this one… she was just so shocked that her jaw hung open!

I told her that this was my baby, and I wanted this nose-job done today! After all, how risky could it be?!?! The doc told me that performing surgery on a newborn is always risky, and should only be done when absolutely necessary for the well-being of the baby.

No nose-job would be happening for my baby today.

Disappointed, I began to leave.

But then I remembered the other reason I had brought my baby in to the pediatrician’s office that day.

“When can we have him circumcised?” I asked.

“We can fit him in today if you’d like!” replied the doc. “Although your insurance doesn't cover it any longer, because it's considered cosmetic, so you’ll have to pay the full $500 up front. Is that okay?”


As long as you have the ability to process information, this should make you THINK.