Just posting the latest tragedies, or near-tragedies that surfaced on my Facebook news feed.

(Unless there is medical or clinical indication, all male infant circumcision is a tragedy.)

First up, another story where a child nearly bleeds to death. The child is put in the NICU and the doctors had to cauterize the wound to stop the bleeding. 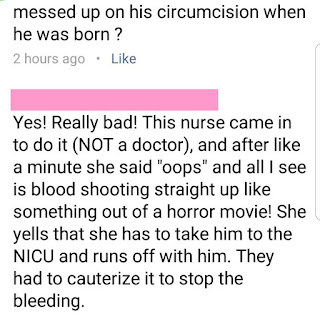 Another child turns black and blue, and is given urine retention problems by his circumcision. Apparently, the boy's bladder had to be drained with a neonatal feeding tube as a catheter.

This happened at Dothan, Alabama. 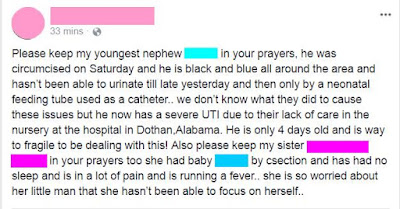 The poster "doesn't know what they did to cause these issues" (Really? You don't think the fact that the child was needlessly circumcised had ANYTHING to do with it?), but apparently the child now has iatrogenically induced UTI at 4 days old.

I've said it before, and I'll say it again.

I say these things every time I post tragic stories on here.

Unless there is medical or clinical indication, circumcision is purely cosmetic, non-medical surgery.

Being an elective, non-medical procedure, any risk is unconscionable.

In 2012, the AAP admitted in their circumcision policy statement that the true rate of circumcision risrks is unknown.

What I post here are only stories that have surfaced on Facebook, but doctors and hospitals are not required to report on adverse circumcision outcomes, doctors have financial incentives to misatribute deaths and complications due to circumcision to something else, and parents agree to be complicite to hide their shame.

The risks and complications of circumcision are real, and it should concern Americans that organizations like the AAP are not interested in documenting them.


Related Post:
INTACTIVISTS: Why We Concern Ourselves
Posted by Joseph at 8:26 PM