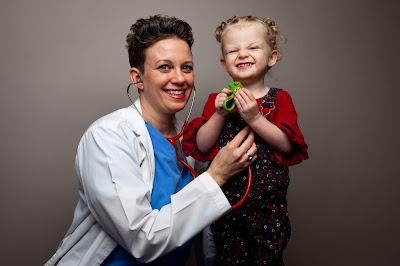 Also known as Carole Keim, MD, the Facebook user who runs the page "Doctor at Your Door" recently faced backlash from intactivists for a video she posted about the supposed "pros and cons" of male infant genital mutilation. (Also known as "male infant circumcision.") The video can be found here (on Facebook), but I've taken a snapshot and posted it below in case she takes it down. 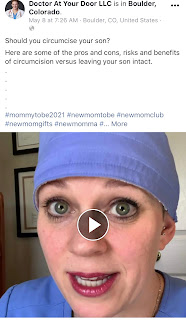 She spouts the usual "pro-and-con" BS, framing it as a "parental choice," as most male infant circumcision advocates do.

Once intactivists made the scene, however, she started blocking users and deleting comments, leaving up only those who were favorable to her, including comments that appear to be from circumfetishsts spouting pro-circ non-sense.

Her videos are now locked for comments (at least to me, anyway), she has allowed only pro-circ comments to remain. 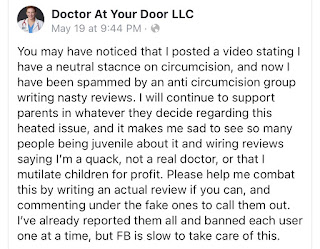 It's interesting she describes her "stacnce" on circumcision as "neutral," given her credentials on Linked-In.

"Neutral?" Or inherently biased?
Her latest "Experience" entries reveals just how "neutral" she actually is: 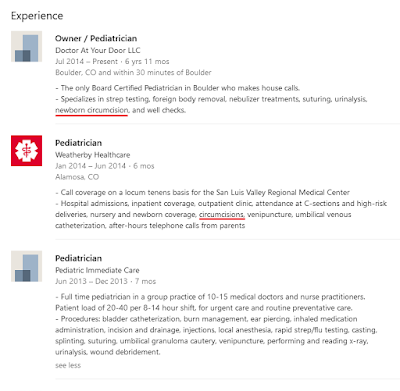 You can't have a "neutral" stance on male infant circumcision when it's one of the main things you do for a living.

A quote by Upton Sinclair comes to mind:

"It is difficult to get a man to understand something, when his salary depends on his not understanding it." ~Upton Sinclair 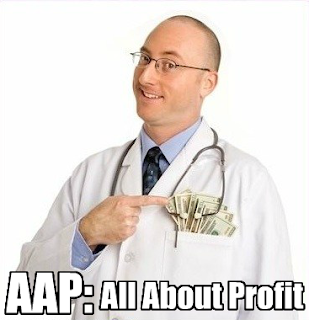 Religious Bias?
There is yet one more thing that makes me question Dr. Keim's "neutrality"; a quick google reveals that Keim is an Ashkenazic (Jewish) surname. 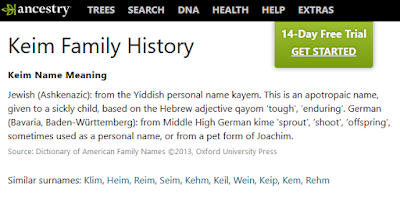 Also, if one looks carefully at her Linked-In page, there seems to be mismatch between her current surname and what is listed as her page address. Check it out:

Looking up "Gedenberg" does not really yield much in terms of Jewish connections, save for obituaries here and there, although anything ending in "-berg" sounds suspiciously Jewish to me.

Promoting male infant circumcision for its "health benefits" while also belonging to an ethnoreligious group whose very identity is founded upon the forced genital cutting of children is a glaringly obvious conflict of interest.

As with the financial conflict of interest, you can't have a "neutral" stance on circumcision if you've got a religious conviction to protect what is seen as a "divine commandment." It would be difficult if not impossible for her, to say anything that would result its demise.

Either because she needs parents to say "yes" to the mutilation she offers, or because she can't put what she might see as a sacred command in jeopardy.

Parental Choice is the Pretext
I've already written about this, but relying on "parental choice" as a defense is an escape hatch that relieves doctors of professional responsibility.

It is inescapable that parents make decisions for their children up until they are eighteen; no one is challenging this fact.

However, parents make decisions when and if there is a decision to be made.

Doctors must first diagnose a problem and determine that conventional methods of treatment have been exhausted before finally recommending surgery.

Parents can't merely “choose” for their child be put on chemotherapy if the doctor hasn't diagnosed cancer in the child yet.

Parents can't merely “choose” for the doctor remove organs like the gall-bladder or the appendix; a doctor must make a diagnosis and determine that a child needs surgery.

Only then can parents be asked to make a “decision.”

Male infant circumcision is the only time a parent can ask the doctor to remove a normal, healthy part of a child's body without medical or clinical indication, and the doctor can comply.

It's the only time a doctor can treat non-medical surgery on a healthy, non-consenting person as a "choice" they can present to parents.

In fact, in any other case, reaping profit from performing surgery on healthy, non-consenting individuals constitutes medical fraud.

Medical Fraud
Without medical or clinical indication, a doctor has no business performing surgery on healthy, non-consenting minors, let alone giving parents any kind of "choice."

This doctor's career depends on our government's courts and legal system looking the other way at this very fact.

Perhaps Dr. Keim knows at some level that she is offering parents a false “choice?” Why else would she get defensive and start blocking people calling her out?

It's understandable that she would want to block intactivists; she must protect her business model of violating the basic human rights of children and then putting that blame on their parents.

She is, after all, a businesswoman; she must secure clientele and protect herself from lawsuits.

She and all doctors must know that they are profiting at the expense of the rights of healthy, non-consenting individuals under the pretext of "parental choice."

What doctors SHOULD be saying:
If Dr. Keim were an honest person, she would tell parents the truth; there is no medical need to perform surgery on healthy children's genitals.

She would tell parents that no respected medical organization in the world recommends male infant circumcision, not even the American Academy of Pediatrics in their 2012 statement.

She would tell parents that the true incidence of complications after newborn circumcision is unknown (AAP 2012), and thus a true risk/benefit assessment is not possible.

She would tell parents that 70% of males are intact globally, and that there simply isn't an epidemic of UTIs and "problems" in those countries where men are mostly intact.

She would tell parents that despite 80% of American males being circumcised from birth, we still have some of the world's highest rates of STDs, including HIV.

She would tell parents that even when circumcised, adult males must wear condoms for actual protection from any STD transmission.

She would tell parents that the risks of male infant circumcision include infection, partial or full ablation, hemorrhage and even death.

She would tell parents that circumcised men often experience desensitization as a result of the naked glans penis building up keratin over time.

She would tell parents that painful sex for women is associated with a circumcised partner.

She would talk about all the adverse outcomes of circumcision, which include botched circumcisions which may need revision surgery later on.

She would tell parents about the possibility that their child might resent being circumcised as an adult.

She would tell parents about the possibility of circumcision causing painful sex and/or erections in adult men. (See BBC stories at the bottom of this post.)

She would treat male infant circumcision as she would any other surgical procedure; as a very last resort only after other methods of treatment have failed.

No doctor would discuss the "pros and cons" of "early appendectomy" or "early gall-bladder removal," "infant labiaplasty," and then "let parents make a choice."

Male infant circumcision is the only procedure doctors can get away with "letting parents decide" to have them perform on healthy, non-consenting infants without any kind of diagnosis.

If Dr. Keim were an honest, ethical person, she would tell parents she refuses to perform elective cosmetic surgery on healthy, non-consenting minors.

But then she'd probably lose business, and at the end of the day, that's any American physician's bottom line.

I wouldn't want her at my door.

In any other case, reaping profit from non-medical procedures on non-consenting individuals constitutes medical fraud.

You're in the business of male infant genital mutilation and the violation of basic human rights, Dr. Keim.

The time is coming where the men your circumcised as children will hold you responsible, and the pretext of "parental choice" will not save you.

Apparently she posted this elsewhere as well:

When has a newborn child died because he had anatomically correct genitals? I’d like to see that medical paper.

I think it’s interesting how facts that are devastating to her business are “hate speech” now.

Pseudoscience and pseudomedicine spouted to convince parents to allow doctors to mutilate their children is hate speech.

Lo, it is scientific profanity not to mention medical fraud.

"Doctor At Your Door" Homepage

BBC News: My Son Killed Himself After Circumcision