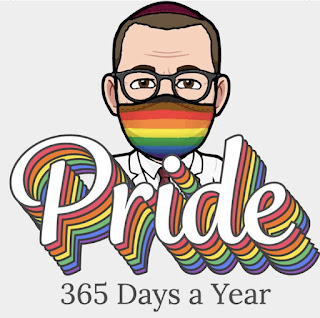 Yes, traditions die hard, and really, short of stomping our feet, there is nothing we can do to stop an intrepid adherent of a violent religion intent on carrying out his faith.

It’s not illegal, at least yet, and as long as they can get away with it, cutters gonna cut.

And hey. Mohels gotta eat too.

I should point out that up until 2018, there was a federal ban on female genital mutilation (was), and for a while, yes, you could face federal charges for mutilating a girl, without religious exemption. This is the way it is in many Western countries.

Thanks to the naturalization of male genital mutilation in this country though, mohels get a pass. It is my speculation that this shield of protection from criticism and scrutiny is a big reason why Jewish “researchers” help put out “studies” saying circumcision “prevents disease,” why Jewish doctors in American medical organizations protect it by codifying it in medical policy, and Jewish lawmakers block any measure condemning the practice.

But here is something I don’t get.

Scrolling down my Facebook feed, I see that some mohel actually took the opportunity of Pride Month to push his business. 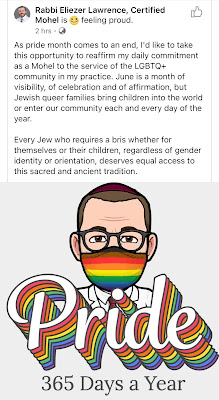 I’m not Jewish, never could be, thank my lucky stars I wasn’t born to Jewish parents. But, is it just me, or is this not just a little bit hypocritical?

On the one hand, we have this mohel, and he wouldn’t be the first, plugging his business of infant genital mutilation, preaching to the Jewish gay community that they ought to have their children mutilated to fulfill religious obligation. Genesis and all that. 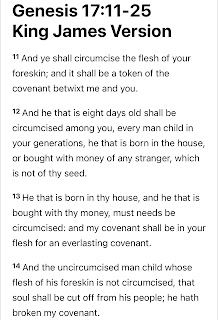 But on the other hand, if I recall correctly, Jewish gays are already in trouble with Adonai, as they are an abomination who should be “put to death.” 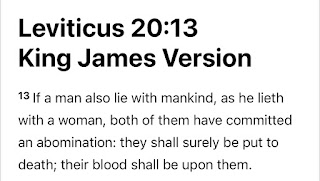 Adonai wants you dead, but you still need to fulfill your religious obligation to have any male children you adopt, mutilated.

The same guy who is morally obligated to kill you wants you to pay him to mutilate your baby boy.

How does that make any sense?

How are these two things reconciled?

We’ve all heard it before.

“Well, it’s the 20th century, and obviously there are things in the Torah we just don’t do this day and age. We no longer sell our daughters into slavery nor do we sacrifice bulls at the altar.”

And this is exactly right.

There are things we just don’t do this day and age.

So then the bigger question is, why even circumcise children as a religious obligation in the first place?

Some Jewish families are opting for a bris shalom instead of a mutilation ritual that may or may not result in the child losing his penis, getting infected with herpes or bleeding to death. (Google these things. Herpes is exclusively a risk of ultra orthodox Jewish circumcision.)

Why is this still happening?

It’s hypocritical cringe to see this mohel shamelessly trying to capitalize on Pride Month to shamelessly plug his business of infant genital mutilation.

Am I the only one who sees the audacity of a mohel reminding Jewish gays they have an obligation to uphold?

“The Torah says you’re an abomination to Adonai and that you should be put to death. But bring me your male babies so that I may mutilate them as the sacred and ancient Torah says.”

Don’t get me wrong.

I think it’s abhorrent that there are actually people dedicated to the business of child ritual mutilation in and of itself.

Plugging to the very people your holy book says you’re obliged to kill is on a whole ‘nother level.

The wording is so audacious!

“Every Jew who requires a bris whether for themselves or their children, regardless of gender identity or orientation deserves equal access to the sacred and ancient tradition.”

All the progressive buzz words are included here.

How do you “require” a bris for someone other than yourself?

He’s just not going to mention that little fact that, HELLO, if you’re gay, Adonai thinks you’re an abomination that should be put to death?

What if you or your child identify as female? Would he then not be committing female genital mutilation?

What does the Torah have to say about trans folk with top and bottom surgery?

Here. I can help.

Love the nod to “equity.”

What would we say about an imam or African shaman offering “equal access” to female genital mutilation?

And what do Jewish LGBT folk who take their children to this guy to have them mutilated hope to achieve?

Some sort of redemption?

Having your male children mutilated hoping Adonai will forgive you for being gay or trans just adds a whole ‘nother level of cringe.

This whole thing stinks any way you look at it.

In the end it’s just another entrepreneur capitalizing on Pride Month to push his business of infant genital mutilation.

The way he’s trying to frame this “sacred and ancient tradition” as “progressive” and “equitable” to push it on Jewish gays, but more importantly, at the expense of baby boys is absolutely despicable.

Jewish LGBT folk, the Torah already says Adonai hates you and you should be put to death.

If you’re going to dismiss passages that call for the end of your existence as just “a relic of times past,” you might as well opt for a bris shalom.

I’m sure you condemn parents trying to give conversion therapy to their children. Why would you force a covenant your child can’t even comprehend on them? If you respect their autonomy, their identity, their bodies and their choice to do what they want in life, you won’t do this.

What an absolutely shameless plug by a guy whose business is infant genital mutilation.