Since Granola Babies posted an inflammatory ad on Facebook, people have tried responding in different ways. While defenders of Granola Babies and their ad claim that their message was not meant to be inflammatory, and that all they've seen since posting the ad were "judgment" and "personal attacks," even gentle responses questioning the ad have been deleted, and some people have been outright banned for kindly and non-judgmentally suggesting the ad could send the wrong message. Granola Babies is not letting the other side be heard, silencing any dissenting views, which was the whole reason for my previous post.

Granola Babies has made it clear that they are not going to allow anyone to contradict them, and play the victim card to try and gain sympathy and corroboration from others, so intactivists have taken it upon themselves to publish the fact on their own blogs, and/or creating parodies of the Granola Babies ad themselves. (You've already seen mine.) Within the past twenty-four hours there have been a few recreations of the ad. A compilation of them can be seen on the Facebook group Saving Our Sons.

Given the fact that the name "Granola Babies" gives the impression that it's a crunchy group, the ad should have looked like this: 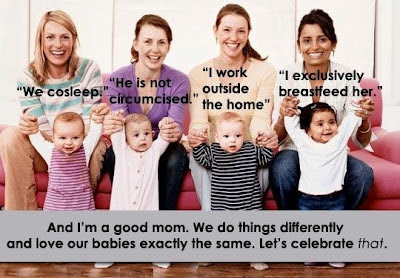 Among co-sleeping and breastfeeding, circumcision is a non-sequitur, beginning with the fact that co-sleeping and breastfeeding do not involve bodily mutilation. Furthermore, it is usually parents who co-sleep and breastfeed who are constantly having to justify themselves and find refuge among the crunchy crowd. Parents who circumcise don't have to work very hard to find support from their family members, their doctors, the news media etc. Just check out major parenting forums like CafeMom. To be more accurate, Granola Babies should have included "He is circumcised." with "My baby will never sleep with us.", "I let him cry it out."and "I exclusively bottle feed her."

It's interesting that advocates of Granola Babies and their ad say that intactivists have been nothing but "judgmental" and "attacking." It seems while any criticism of circumcision is misconstrued and exaggerated as a "judgmental attack," crunchy moms who choose leave their boys intact have to endure comments like "You didn't circumcise him? Ew, gross!" Or "He'll never get laid." The same people that utter these comments will turn around and say "MIND YOUR OWN BUSINESS! WE'RE THE PARENTS, WE DECIDE! DON'T YOU DARE JUDGE ME!" if you suggest there's anything wrong with circumcision. 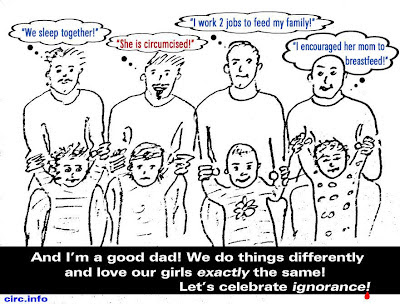 It was easy to spot the non-sequitur here, wasn't it.

Somehow, I don't think female circumcision is a "parental choice" Granola Babies is willing to "celebrate." 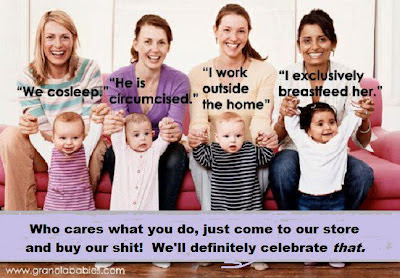 This is probably Granola Babies' ad at the most basic level. They are a business after all. Pandering to mothers who chose to circumcise their boys and making them feel entitled for the sake of gaining their business will probably have been the worst business decision they ever made.

Up until now, the responses have been sarcastic and vengeful. But let's take a look at a different response. This one, on the Saving Our Sons Facebook page seems to be the most liked: 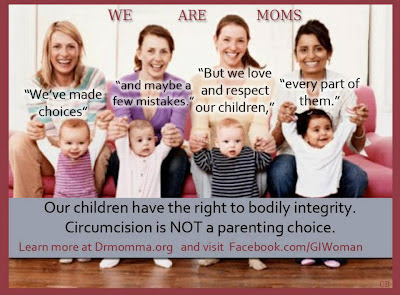 Perhaps this is what advocates of Granola Babies claim their ad was going for?

It's been pointed out to me on this very blog and in other mediums that there are mothers who have come to regret having had their sons circumcised. These mothers will have circumcised their sons because they actually thought was best for them. The fact that they come to regret a decision they made, and admit that they were wrong shows how much they love their sons, and how open minded they are to new information .

But this isn't about that.

Some blame parents still; in my minds eye, parents are given information by the doctors they trust, and doctors take advantage of this trust to profit at their children's expense. "This is the age of information," some say. "Any parent could look up this information and come to the conclusion that circumcision is something they do not want to do to their kids." But why should they trust what they find on the internet over the authoritative "advice" from the doctors they trust?

Whose responsibility is it to know better? Who wields the knife? Who waives their credentials about insisting everybody call them "doctor?" Who went to school for 10 years or so to earn their degree? Whose professional responsibility is it to KNOW better? But somehow when it comes to circumcision they're suddenly "too stupid to know," and parents must weigh the "evidence" ("evidence" which no medical organization in the world can use to recommend circumcision by the way...) and come up with their own conclusion as to whether a surgical procedure their DOCTOR is offering them for their child is medically necessary or not?

In my opinion, it's not parents who are to blame; it is the doctors who take advantage of parental naivete and the bloated sense of entitlement they help stoke. A parent can look up all the information, but most do not know how to discern it, not to mention it is a doctor's professional responsibility to know better; it's why he gets paid the big bucks. It is medical fraud that a doctor can get away with placing the onus of "the big decision," one that cannot actually exist without medical or clinical indication, on parents, in order to absolve himself from the responsibility of a surgical procedure HE PERFORMS and should thus KNOWS BETTER than parents as to whether it is medically necessary or not.

It is a mistake to attack and humiliate parents over something they honestly didn't know any better about, and who would take it all back if they knew what they were doing to their children.

I'm not advocating that.

But I also do not advocate corroberating with parents, rewarding willful ignorance, making them feel justified and entitled by calling circumcision a "choice" to be "celebrated."

This ad comes off as pandering to parents who circumcised their children in order to gain their confidence and business, all at the expense of children's basic human rights, and it's why it is so infuriating to me.

EDIT:
Saw this in my Facebook news feed today and I thought I'd add it: 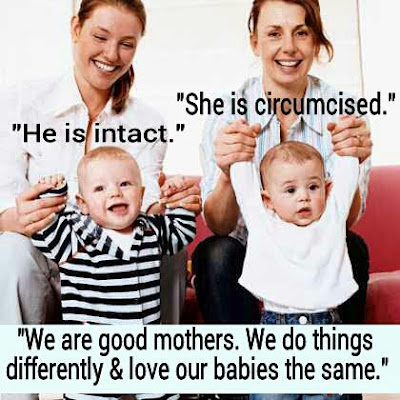 One of the comments (in response to other Facebook users who expressed disgust) read:

"I am stunned that people are missing the irony in this photo; no one advocates circumcising girls, but people seem to think of circumcising boys as an acceptable ”option” in parental decision making. By switching the sexes around this picture shows our cultural blindness to the brutality of male circumcision, the same cultural blindness that parents in countries that circumcise females also have."

DISCLAIMER:
The views I express in this blog are my own individual opinion, and they do not necessarily reflect the views of all intactivists. I am but an individual with one opinion, and I do not pretend to speak for the intactivist movement as a whole, thank you.
Posted by Joseph at 5:02 AM