Clitoraid, a private non-profit organization, which aims to assist FGM victims who want to undo their mutilations, has spoken out to denounce the German decision to legalize the ritual genital mutilation of boys.

“Bodily harm is against the fundamental rights of all children, and we can’t understand when a so-called civilized country such as Germany would allow its male babies to be so readily mutilated legally!" said Nadine Gary, spokesperson for Clitoraid.

“On Nov. 28, the United Nations passed a resolution that condemns all cultural and religious arguments in favor of FGM because the act constitutes a gross violates of children rights, but how can the U.N. ban Female Genital Mutilation and not denounce Male Genital Mutilation as well? Is it exempting certain religions from respecting the fundamental right of baby boys?” Gary asked.

Gary continues, "According to the World Health Organization, 30 percent of males worldwide are circumcised. This means billions of people have been mutilated without their consent."

Brigitte Boisselier, Ph.D., head of Clitoraid, affirmed that mutilation of any baby or child in the name of a god is unacceptable.

“It’s been done for centuries under the pretense that a god requested it, but no religion should be allowed to harm infants or children who can’t give informed consent,” she said. “We’re setting up a hospital in Africa that’s due to open next year, where female victims can go to have genital repair surgery for free. “And, thanks to Clitoraid, thousands more can find relief at several clinics in North America. But we’ve also been getting e-mail from hundreds of circumcised men who want to have their own mutilation undone. They need help too! So, as Rael has repeatedly stated, it’s urgent to have all the old scriptures reviewed by an independent committee on human rights so that all religious group practices are in agreement with the Declaration of Human Rights.”

Rejected Amendments to German Circumcision Law
Amendments to the German law to legalize the genital mutilation of male children were put forth by circumcision opponents in the final Bundestag debates. Among the amendments that were rejected,  was a provision that parents cannot be allowed to circumcise a child if he is able to, and does verbally express his wishes to not be circumcised. (e.g., if the child can and does say "NO," the parents can no longer circumcise him)The Bundestag majority rejected this amendment, meaning that according to the new law, the parents can physically drag him into the doctor's office, restrain him and circumcise him against his express wishes, and he has no protection.

Another amendment proposed that parents waited until he was 14 to decide whether or not he wanted to be circumcised.

This too was rejected. 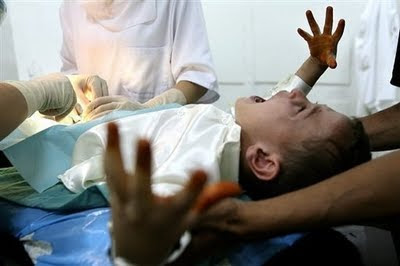 In Muslim traditions, boys are circumcised at later ages against their verbalized express wishes.

Not so long ago, the AAP tried to approve a "ritual nick" for girls. The procedure wouldn't remove anything, and the AAP admitted that it was much less severe than male circumcision. The logic behind this move was that if they offered a "ritual nick" here in the States, then parents wouldn't take their daughters abroad to have more drastic procedures done. There was a world outcry, and the AAP was forced to retract their endorsement. The message was clear; under no circumstances were medical professionals to come near a girl's vulva with a knife, not even for a "ritual nick."


When AAP fellow Dr. Hatem al-Haj, PhD, MD published a 41-page Arabic-language paper titled “Circumcision of Girls: Jurisprudence and Medicine," where he says female circumcision is recommended and even “an honor” for women, he was fired by the MAYO Clinic. (Interestingly enough, a petition started to revoke this man's certifications states in bold lettering: "Remember: It doesn't matter how "little" you cut a little girl's vulva. It's still felony child abuse.")

Yet Jewish doctors who circumcise boys can get away with both reciting the "circumcision has medical benefits" sutra, and expounding with beaming pride that circumcision is this "time-honored tradition."

I'll have to steal the quote from above and make it part of the intactivist movement:

It doesn't matter how "little" you cut a little boy's penis. It is still child abuse, and a violation of the most basic of human rights.


To continue with my own quotes:


Thank you, Clitoraid, for acknowledging that the genital cutting of BOTH sexes is a gross violation of the most basic of human rights, and for resolving to help victims of BOTH genders regain what was stolen from them.

Related cause:
Help find ways to restore intact organs for men who want to undo their mutilations

So Where's the "Sunat" Party?