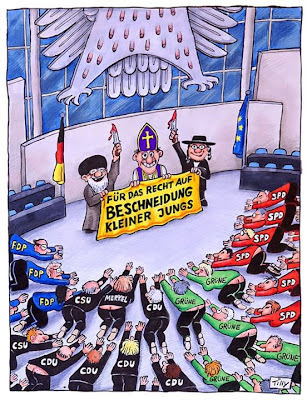 "For the right to circumcise little boys."

Well, it appears that Germany chose to cave to political blackmail and pass a law to "protect" the so-called "religious right" to take a child and mutilate his genitals.

I've already commented on this before, so instead of repeating myself, I'm just going to dissect a Reuters' article reporting this turn of events, since they're not publishing comments.

"The ban - imposed on the grounds that circumcision amounted to "bodily harm" - triggered an emotional debate over the treatment of Jews and other religious minorities, a sensitive subject in a country still haunted by its Nazi past," begins the article.

The Cologne ruling was not mistaken; unless there are medical indications, circumcision DOES amount to bodily harm, and the boy involved in the ruling was one of many cases in point.

What's interesting is that one bodily harm, circumcision, is being defended by alluding to the bodily harm German Nazis imposed on Jews. A bit of an oxymoron. "Shame on Germany for wanting to protect children from bodily harm; remember what they did to Jews sixty years ago." (?)

"The outcry prompted Germany's centre-right government and opposition parties to draw up legislation confirming the practice was legal - overruling the decision by a court in the western city of Cologne."

As if the legality of forced genital mutilation on minors was something to confirm. I'm afraid German Common Law is rather clear on this, as are the laws of many other industrialized nations. Germany's government was faced between upholding its Common Law, and divorcing themselves from Nazi labels.

"The new law passed by an overwhelming majority in Bundestag lower house said the operation could be carried out, as long as parents were informed about the risks."

This may actually be a light at the end of the tunnel for human rights activists; ultra-orthodox rabbis in New York are fighting to keep the City from passing a law that demands precisely this.

Still, Germany would never allow female circumcision "as long as parents were informed about the risks."

In New York, Jewish groups are fighting to keep the city from requiring them to inform parents about the risks, as this is seen as an "infringement of  their religious freedoms."

"This vote and the strong commitment shown ... to protect this most integral practice of the Jewish religion is a strong message to our community for the continuation and flourishing of Jewish life in Germany," said Moshe Kantor, President of the European Jewish Congress.

Jewish life, yes. Muslim life? Only if your child is male; some Muslims see female circumcision as "an integral practice of the Jewish religion." Take a look at what's happening in South East Asia;
the Malaysian Health Ministry wants to medicalize female genital cutting.

Germany's Catholic Bishops Conference said it hoped the bill would help safeguard religious freedoms. No comment was immediately available from the country's Central Council of Muslims.

Does the new law protect these "religious freedoms?"


"PAIN MINIMISED
The May ruling centered on the case of a Muslim boy who bled after the procedure and the ban only applied to the area around Cologne."

But this forced lawmakers to consider a change in the law, as, actually, the Cologne ruling reinforces German Common Law.

"But some doctors in other parts of Germany started refusing to carry out circumcisions, saying it was unclear whether they would face prosecution."

Actually, they stopped because it was rather clear to THEM that they would.

"Under the new law, a doctor or trained expert must conduct the operation and children must endure as little pain as possible, which means an anesthetic should be used. The procedure cannot take place if there is any doubt about the child's health."

No such provisions and exceptions exist for female genital cutting.

Female genital cutting is always wrong, and it doesn't matter if a doctor or a "trained expert" conducts the ceremony, and that the children "endure as little pain as possible."

For most other surgery as performed by doctors and physicians, surgery is performed AS A RESULT of a doubt in the child's health. i.e., there is medical necessity that prompts it. This seems to be the only case where a child must be HEALTHY to undergo surgery.


"Justice Minister Sabine Leutheusser-Schnarrenberger said no other country in the world country had made the religious circumcision of boys an offence."

Plenty of laws to make religious circumcision of girls an offence though...

"In our modern and secular state, it is not the job of the state to interfere in children's' upbringing," she said.

Except if the child is a girl, I'm sure.

Child welfare group Deutsche Kinderhilfe disagreed, saying the government had "(pushed) through the legalization of the ritual of genital circumcision ... against the advice of child right campaigners and the medical profession."


And they are right.

This is purely a political move, and everybody knows it.

German Common Law is rather clear on this matter, and the Cologne Ruling serves to make it even clearer. German lawmakers are choosing to look the other way because they fear Nazi labels.

All double-standards, self-contradiction and beating around the bush. Let's see how this move plays out, as it flies in the face of Germany's Common Law. Special pleading. What's next? "Protecting" female circumcision? Sharia Law to appease the Muslims?

I've asked before; how far are "parental rights" and "religious freedoms" protected?

As long as doing so doesn't label you Nazi, it seems.

Closing Remarks
Most of what I have to say on this matter I've already done so on past post, but I wanted to copy and paste the closing remarks here.

Intactivists, do not despair; to those of you who do, you should have this coming. We shouldn't despair when politicians with agendas change the laws to appease voters and preserve popularity. Laws don't change anything. They never do. In a social movement, laws are the very last thing to change. What we need to work on is changing people's attitudes. Female circumcision was swimmingly outlawed because our country already viewed the practice with disdain. History shows us that laws reflect social change, not bring it about. And, it looks like, judging by news articles and reports, the fact that more and more people are openly talking about the practice, the very fact that it's being questioned in courts, change is already happening.

Do not despair, and keep educating. More and more people listen every day.


"Truth suppress'd, whether by courts or crooks, will find an avenue to be told"
~Sheila Steele

"Do nothing secretly; for Time sees and hears all things, and discloses all"
~Sophocles


DISCLAIMER:
The views I express in this blog are my own individual opinion, and they do not necessarily reflect the views of all intactivists. I am but an individual with one opinion, and I do not pretend to speak for the intactivist movement as a whole, thank you.
~Joseph4GI


Related Post:
The Cologne Ruling and the Limitations of Religious Freedom
Posted by Joseph at 12:22 PM