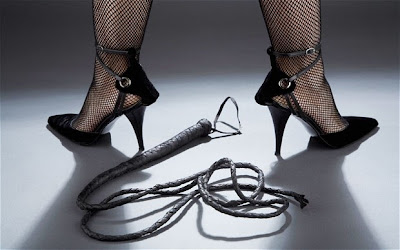 Fetish - What Does It Mean?
To understand what the word "fetish" means, as it relates to sexuality, let us analyze its definition from a few different sources.


3. Something, such as a material object or a nonsexual part of the body, that arouses sexual desire and may become necessary for sexual gratification.

This definition comes closer, except that it is, in my opinion, forgiving. At least to me, "fetish" not something that "may become necessary for sexual gratification," but something without which sexual gratification is not possible. In this sense, Dictionary.com is more accurate, with its inclusion of "fixation."


Merriam-Webster is much less forgiving, but still forgiving, with its usage of "may." It conflicts with "is necessary" in the first part of the definition. Since its real or fantasied presence "is psychologically necessary for sexual gratification," then a fetish most certainly does interfere with "complete sexual expression."

So Who Has a Fetish?
Now, let's analyze the realities surrounding the state of the circumcised and anatomically correct male human penis. While the presence of a foreskin is normal in all males at birth, the circumcised penis is a forced, artificial phenomenon. A subversion of what would otherwise be anatomically correct male genitalia, the circumcised penis is a contrived vision of what the male human penis is supposed to look like, which doesn't actually occur normally in nature; being born without a foreskin is considered a congenital anomaly, known as "aposthia."


"Foreskins gross me out. I would never have sex with a man who wasn't circumcised. My son's future wife will thank me because I didn't leave my son with a gross-looking anteater." 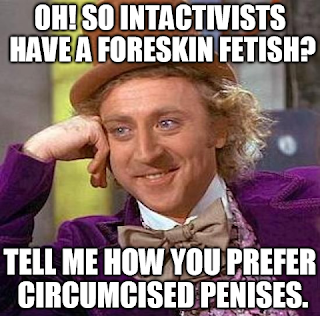 It's a Two-way Street, BUT...
The fetish accusation can go both ways; if a person cannot be sexually gratified unless a man has anatomically correct genitalia, if being circumcised is a deal-breaker, if that person is turned off by pornography with circumcised men in it, then it could be said that a person may have a "foreskin fetish." Therefore, only someone who for whom circumcision or the foreskin poses no obstacle for sexual gratification, one way or the other, can be said to not be harboring any kind of "fetish."

Let's change the body part and see what happens; if a man is attracted to women who are missing a breast due to a mastectomy, it could be said that that man has a fetish for women with a mastectomy. Could it be said, then, that a man has a "fetish" if he has a preference for a woman with both of her breasts, and is sexually turned off by a woman who is missing a breast?

Bluntly, my question is this; how can a sexual preference for normal body parts as they occur in nature, sexual body parts, mind you, be considered a "fetish?"

How is it "normal" to feel that sex without a foreskin is "complete sexual expression," and that the presence of a normal, healthy body part poses an obstacle for sexual gratification?

In what backwards society is the preference for normal, healthy genitals considered a "fetish," and a preference for maimed, mutilated organs, to the point of being unable to achieve sexual gratification otherwise, considered "normal?"

Groups such as the Acorn Society, the Gilgal Society, and the Cutting Club openly admit to a morbid fascination with circumcision to the point of sado-masochistic fetish. These groups advertise that doctors are among their members; there are anecdotal accounts of doctors becoming sexually aroused when circumcising boys.

For those who can stomach it, the comments and behaviors of proponents of circumcision would make a fruitful area of psychological study. Circumcision certainly provides an opportunity not only to handle boys' penises without the condemnation that a sexual assault (in the sense that phrase is normally used) would attract, but also the opportunity to exercise power over another human being, to alter the penis and to control it and the boy's future sexual life.


In Closing
So who are the fetishists?

Is it those say children should be circumcised to make them "sexually attractive?"

Or is it those who insist children should be left alone?

Could it be that when circumcision advocates accuse intactivists of having a "foreskin fetish," the pot is calling the kettle black? 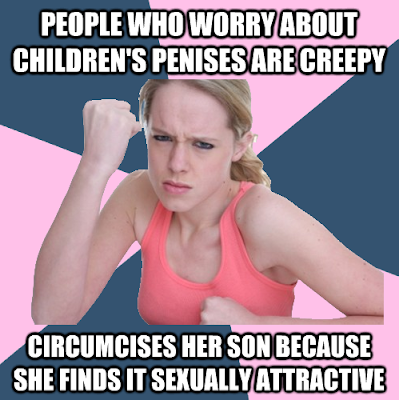