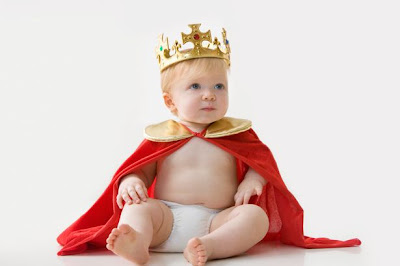 A new prince has been born to Duchess Kate Middleton and Prince William, and Jewish circumcision advocates are already trying to use this opportunity to seek celebrity endorsement for circumcision.

Reads a headline from jewishpress.com:

"Duchess Kate Had a Boy, Call the Mohel"


The last time I checked, the Royals weren't Jewish. What does the Jewish Press care whether the new prince is circumcised or not?

Reads another headline, this time on MSN:


Well, at least the authors of this little piece are honest about the fact that they are obsessed. The article goes on:

"Sure we're curious about what the royal baby's name will be, but what we really want to know is: Will there be a royal mohel?"

There doesn't seem to be a name attached to this article. I'd like to know who was the obsessed author of this piece.

This part is rather interesting:

"Princess Diana apparently wasn't a fan, however, and her boys weren't given the snip (there were whispers that Prince Charles had both boys circumcised after Diana's death, but that remains unproven)."


Whispers where? Amongst whom?

Very recently, Prince William was caught taking a wee, and there are pictures where it can clearly be seen that he has an anatomically correct organ.

Those interested in taking a glance at the royal peen can visit this link.

This "whisper" is nothing more than circumfetishist fantasy and Jewish wishful thinking.


"Little prince in the U.K.: What about the bris?"


Again, what in the world do Jews care whether the British goy prince is having a Jewish bris or not? Are they so desperate for validation of their blood ritual that they have to hope the new prince will be made into an unwitting poster boy?

Though the headline fails to conceal a hope that the child is circumcised, by a mohel in a bris no less, this author has integrity, pointing out the lengths to which some have gone to insist that the new prince must be circumcised:

"One group that will not try to claim the prince for its own is the Jewish community."

Will not? Or should not? Judging from other headlines, the above statement is but wishful thinking.

"In a bizarre episode last month a former BBC reporter claimed that Kate, the royal mother, was of matrilineal Jewish descent, making the new prince also a member of the tribe... But serious Jewish genealogists were quick to quash the theory explaining that the Jewish-sounding names in Kate's lineage meant nothing and the prince would not be kosher."


Thank goodness there are Jewish scholars with enough integrity to admit reality.


Still, the author seems to be hopeful that Prince William was ultimately circumcised, going as far as MSN has, quoting "a multitude of sources," this time citing medical necessity instead of Charles rushing the children to be circumcised in Diana's untimely absence.


"If a multitude of sources are to be trusted, then William was circumcised in a medical procedure (according to some versions of his own choice at a much later date) and Harry's foreskin is still intact."

Indeed, who is this "multitude" being cited here as a trustworthy source?

Much to the chagrin of hopeful Jews and circumfetishists, I'm afraid there is visual evidence that Prince William remains as his mother brought him to the world.


Jews and other circumcision advocates want so badly for the new British heir to be ritually circumcised for their own vainglory. Let us hope Kate and William will have the good sense Princess Diana had and spare their child needless mutilation.

UPDATE (7-31-2013):
I just had to post another headline that caught my eye; this time a mohel from the so-called "Initiation Society" eagers to cut the new prince's penis. Reads the Jewish Chronicle online:


"Bring me the royal baby and I’ll give him the snip, says top mohel"


Everyone wants to know whether the new prince will be genitally mutilated except the Brits.


Disclaimer:
The views I express in this blog are my own individual opinion, and they do not necessarily reflect the views of all intactivists. I am but an individual with one opinion, and I do not pretend to speak for the intactivist movement as a whole.

Related Link:
When the Queen is Dead: Long Live the Patriarchy?
Posted by Joseph at 6:23 PM