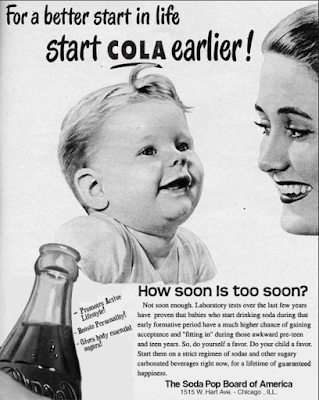 One of the most common excuses for male infant circumcision is that it's supposed to "prevent problems."

Well, recently, on my Facebook news feed I read about a mother who was struggling with problems that circumcision is supposed to prevent. 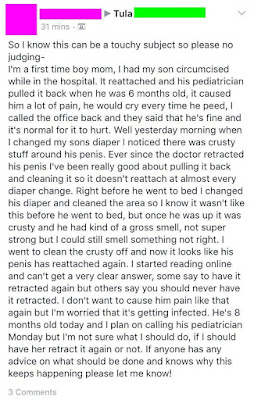 The irony is that circumcision is supposed to make a child's penis "easier to clean," and here we observe a situation where it's actually making it difficult.

Is crusty, smelly stuff supposed to cake around the child's penis too?

A child with normal, inviolate organs is easy to care for and needs no more care than cleaning the genital organs externally.

Are parents being made aware of this?

How come this mother is barely reading about this online?

Aren't the people who are supposed to be giving her "clear answers?"

Isn't this complication something she should have been made aware of BEFORE she decided to go through with the surgery? 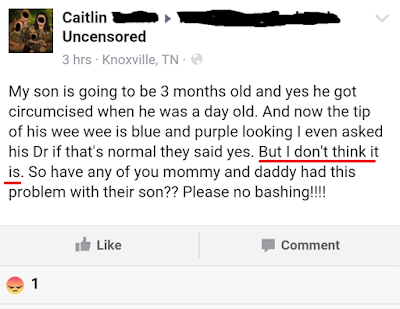 A blue and purple penis is "normal?"

These mothers want "no judgement" and "no bashing," but how exactly do you explain to them that these problems are caused by circumcision, and that they would have been avoided if they simply left their child alone, without hurting their feelings?


Many parenting groups on Facebook and elsewhere warn that people who "bash" and "harass" are automatically banned.  But sadly, dispensing factual, verifiable information constitutes "bashing" and "harassment," because it makes parents feel terrible for having made an irrevocable decision.

To prevent some parents from feeling guilty and "judged," factual and pertinent information parents need to hear is prohibited.

These problems and more can be prevented if only parents knew of these risks, and that not circumcising is also an option.

And finally, yes, another death.

I've already written a number of posts of deaths I read about on my Facebook news feed, so readers can search "death" up in the search bar, or click here if they want to read other posts I've written on the subject.

The risks of circumcision include infection, partial or full ablation, hemorrhage and even death.

You will only read about these on Facebook, because they rarely, if ever, make the news.

Circumcision does not guarantee a problem-free penis.

As highlighted in these and other cases, circumcision may even cause the very problems it's meant to prevent.

Not circumcising is also an option; children with anatomically correct genitals require no special care.

Even in countries where circumcision is a norm, male infant circumcision, as it is performed in the US, is rare. The great majority of circumcised males in the world were circumcised at later ages. This means that these males make it past their early years of life without any "problems" the foreskin is said to cause.

Respected medical organizations around the globe do not recommend male infant circumcision based on the current body of medical literature.

The AAP inched very close to a recommendation, but couldn't commit to one in the end. Their 2012 statement was rejected by respected medical organizations in the rest of the world.

For American parents wishing to educate themselves on circumcision and not circumcising, it is advisable to look for resources outside of the United States, as those written by American doctors and medical organizations may be biased in favor of circumcision, and may be skewing, if not omitting information regarding care for circumcised and intact infants.

As can be observed, one of the mothers in a case above is searching for answers she should have had before making a decision.


Phony Phimosis: How American Doctors Get Away With Medical Fraud


What Your Dr. Doesn't Know Could Hurt Your Child

CIRCUMCISION DEATH: Child Dies After Doctor Convinces Ontario Couple to Circumcise
Posted by Joseph at 9:39 AM