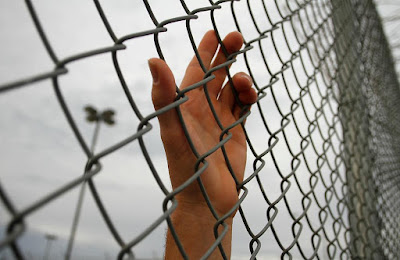 The Florida case is only one case that happened to make headlines, but the fact is that cases like these happen all the time that don't make the news.

The story usually goes like this; parents who have either been divorced or never married have a male child, one takes custody and wants to cut the other parent out of the child's life, the child is circumcised against the other parent's wishes out of spite, and there's nothing the other parent can do about it.

Only very rarely is there a favorable outcome for the parent wishing to protect the child from needless surgery, such as in the case of Boldt vs. Boldt, but on the whole, it's parents who want to have their child circumcised who have the upper hand.

There is a case that has been garnering attention recently; in Indiana, another child is caught in a nasty dispute between a two parents. The mother has sought to cut the child's father out of her life, as well as the child's, and is seeking to have the child circumcised against the father's wishes.

According to the father J Carl Ramos, the mother, Emily Lazoff, recognized he was the father throughout the pregnancy, and he was there for the child's birth. Ramos was listed at the hospital as the father and given a wristband indicating him as the father. According to Ramos, Lazoff didn't say anything about him not being the father until he expressed objection to having the child circumcised.

Lazoff intentionally left Ramos off the child's birth certificate while he was away at work because of his objections to circumcision, which has prevented the Ramos from having any say in the matter; the mother is currently set on having the child circumcised.

The child had been in the NICU since shortly after birth due to low blood sugar. He had not been circumcised because of weight loss, but the mother has remained adamant that the child be circumcised.

The father tried to deliver this letter to the NICU, but apparently they refused to receive it. 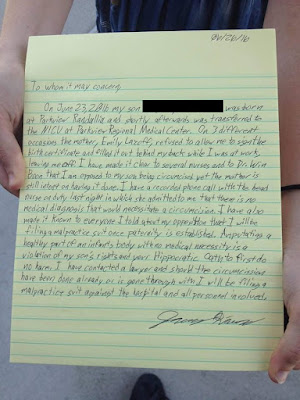 The child's name has been blanked out to protect his privacy, at least for now.

According to Ramos, the nurse in the NICU refused to open the door to take the letter, so it was left under the door to the NICU at Parkview Regional Hospital in Fort Wayne, Indiana.

He has informed several nurses and doctors that he plans to seek legal action if they go ahead with the circumcision but has received no assurances that it won't happen.

Left with no other recourse, Ramos has turned to an intactivist group online called Intactivists International.

The group has helped him raise awareness of the situation, and they have encouraged other activists to contact the hospital by making phone calls and writing e-mails, and at least for now, it appears as though this effort may have worked.

The grandmother of the child has been spotted posting the following in a pro-circumcision support group, confirming that the pressure put on the hospital has spared the child for the time being. 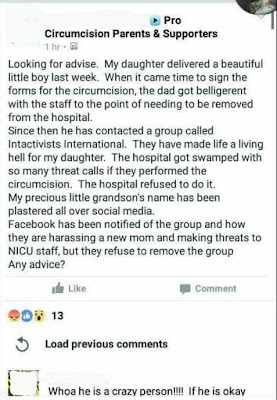 As expected, the group has responded with support for the mother's family, expressing disgust for the father for intervening. Apparently there is something wrong with a father who cares about his son enough to want to do something about it. Shame on him.

J Carl Ramos asks that activists try and contact the doctors in Fort Wayne, Indiana, who might possibly perform the circumcision, and remind them of how unethical it would be to circumcise the child without the father's consent.

Ramos has filed paperwork to establish paternity, but court hearings may not even happen until August. Until then, short of getting on his knees and begging the child's mother and/or doctors in Indiana to not do this, there is nothing he can do.


A mole in the above group has informed the father that the mother is colluding with family and friends to try and make it seem as if the circumcision were already performed in order to get activists to back off. Apparently the father thought the circumcision had already been done until he saw this screen shot in his inbox. Apparently the people in the pro-circumcision group are advising the mother to go somewhere and find a doctor who will agree to circumcise the child secretly. Some are even suggesting that she find a mohel who doesn't have issues with circumcising children for gentiles.

So it's a race against time; this father has to establish paternity, while the mother and her friends and family try and find someone who will circumcise the child quick. Even if the father does establish paternity, he has to get doctors, lawyers, courts etc. to listen to him, and unfortunately, history shows this does not bode well for him.

I'd like to tackle the accusation that intactivists are "sexist" early on.

Already, there are people trying to twist the story by saying we just want to help the father get one over on the mother; he wants to "control her life."

First off, who wants to control who here?

Who has the upper hand?

Who is on the outside looking in?

Who has the advantage?

We're not siding with the father by mere virtue that he is male; intactivists always side with the person whose genitals are in question.

Intactivists always side with the child, and we want to help parents who want to protect their children from needless surgery, and in this case the parent happens to be male.

In the recent Florida case, we stood with the mother for the same reason.

It has nothing to do with "control," it has to do with protecting the most basic of human rights of healthy, non-consenting individuals.

This mother is not a victim; she has her family, willing doctors, willing lawyers and an entire court system rigged in favor of male infant genital mutilation on her side.

The accusation of "control" is pure projection.

It's the father who has been locked out of his own child's life who fights the uphill, losing battle.

See what nerve with which others are advising this mother to go around the father.

This is what people who want to keep their children intact are up against.

In the US, the whole world is ready to mutilate a (male) child at the request of a parent.

Parents who want to keep their children intact can't count on doctors, on others to do what's right and abstain.

Some have already said "What this mother wants to do with her son is nobody else's business."

What about that father?

If the mother genuinely thinks he is not the father then she should have no problem delaying the circumcision until the matter is clarified. What is the big rush? Why is it so important to her that the child be circumcised immediately?

The answer is clearly spite.

And what about that child?

Who's body? Who's rights?

Given what happened in Florida, I will not be surprised to read in my news feed that the mother finally found someone who she could count on to have the child circumcised.


Circumcision Just After a NICU