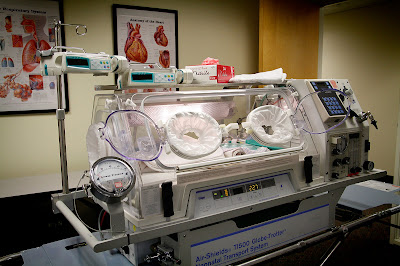 The latest tragedy that has come up in my Facebook news feed is that of a child whose circumcision has resulted in a serious UTI that is spreading throughout the child's body. 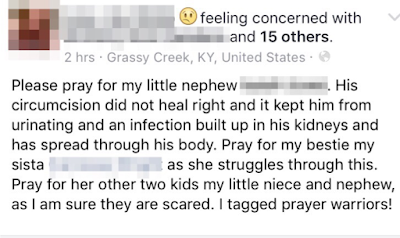 Yes, nevermind what the child is struggling through.
Pray for the mom and kids. Pay no attention to the kid.

Mothers and fathers are warned that circumcision has risks, they ignore us because, you know, we're not doctors, and who are we to tell them how to raise their kids right?

Then tragedy strikes, and no one wants to be told "We told you so."

They ask for prayers for something that could have been totally avoided.

Not to mention it says right there in the New Testament that circumcision is forbidden for gentiles.

What's interesting is that "reduced risk of UTIs" is given as an alibi for performing elective, non-medical circumcision on newborns.

Most UTIs can be remedied with anti-biotics, in boys as in girls.

Somehow I think this UTI will take a little bit more than that to fix.

Note that this UTI was iatrogenically induced.

When are parents, when are doctors going to learn?

In some cases, such as these, circumcision may cause the very problems it is said to prevent.

Because circumcision is elective, non-medical surgery, any number of complications above zero is unconscionable.

Were these parents warned of the risks?

Is the AAP keeping tracks of these incidents?

Because we sure are.

It really is too bad that children have to suffer needlessly like this.

This tragedy could have been avoided had the parents simply refused this for their child, had doctors simply left the child alone.

Without medical or clinical indication, doctors have no business performing surgery on healthy, non-consenting minors, let alone giving parents any kind of "choice."

They day is coming when doctors who perform this needless surgery on healthy newborns will be held responsible.

Related Posts:
FACEBOOK: Circumcision Sends Another Child to NICU - This Time in LA