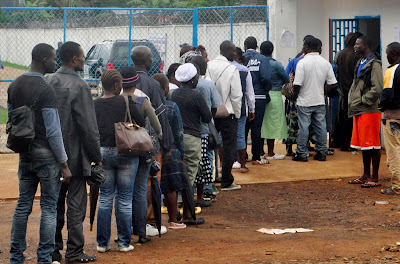 A recent report tells of a Christian health organization in Malawi, doing what they can to upscale male circumcision in the area.

A few things jump out at me.

A Christian Organization? Promoting and Facilitating Circumcision?
First, the fact that this is, at least on the surface, supposed to be a Christian health organization, one apparently run by a Catholic Church.

This is strange, as the New Testament expressly forbids circumcision for gentiles in the New Testament (see Galatians 5), and yet here is this "Christian" organization run by a Catholic Church facilitating precisely that.

Is the Message Being Lost?
Secondly, this whole program seems to be run under the current alibi for promoting circumcision; preventing HIV transmission.

And yet, the free circumcision program is alluring to men, boys and their parents for other reasons.

Asked about their reasons for participating in the program, they give the following responses, according to the report above:

"At the hospital, trained staff do the circumcision. Besides, they use safe tools and this is important for the boys' health," said a father.

"In Balaka, this is the season of initiation camps when young boys are taken to be circumcised as a rite of passage into adulthood. However, this year is tough. Most of us did not send our children because we cannot afford to pay for them due to the ongoig food crisis in the district," said another father.

"Medical circumcision is safer for the kids than getting what they go through in initiation camps, locally known as ndagala, here thy face the risk of HIV infection as the elders use unsterilised equipment. That aside, the boys are subjected to harsh conditions and some boys die due to inadequate care given after circumcision," laments a mother.

"It is pleasing that parents are realizing the need to get their kids circumcised at a health facility and not initiation camps," said a coordinator for the Christian organization.


It sounds like most people are interested in having the boys circumcised at medical facilities, so as to avoid having them be circumcised in the bush as African tribal traditions call for.

This is a real concern, as every year, scores of boys and men lose their penises to gangrene, and scores of others die in the process, or take their own lives at the prospect of living without their male organs.

(Complications are also a concern when it comes to female circumcision. Somehow, I doubt that suggesting girls and women be circumcised by doctors in the hospital setting would be a welcome solution to the problem.)

So it sounds like these boys and men were already going to be circumcised as a matter of religious or cultural course.

In which case, the Christian health organization isn't "promoting" or "upscaling" circumcision per se; they're merely re-routing circumcisions that were going to take place anyway and taking credit for it, raising new questions altogether. (Is there any real upscaling going on? Are there actually any new men and parents of boys being won over to circumcision? Or is this merely a publicity piece exploiting already existing circumcision adherents? In other parts of the country, circumcision campaigns have failed, where circumcision simply isn't part of the culture. Do a search on Soka Uncobe in Swaziland. A good article can be seen here. [Last Accessed 9/3/2016])

Boys and men are now being circumcised in medical facilities, and I suppose in contrast to the initiation schools in the bush where they risk loss of their organs or death, this could be a good thing, but if they're more concerned at getting circumcised to meet a cultural/tribal requirement, do they even care about the so-called "benefits" of circumcision?

Will they be interested in HIV prevention through condoms?

Or will it send the wrong message that being circumcised is a "win-win" because they get circumcised "safely," they meet their cultural requirement, AND they're "protected" from HIV transmission?"

It just seems like a juncture where the message of HIV prevention could easily be lost.

That circumcision might "reduce the risk" of HIV transmission, but males and their partners should still wear condoms is sketchy enough.

If men and their families are more concerned about being circumcised safely to fulfill their cultural requirement, the importance of HIV prevention and wearing condoms may not even register.

Conclusion
Is this about HIV prevention or culture facilitation/preservation?

This initiative is being paid for by PEPFAR for the supposed purpose of HIV prevention, but is this message lost on those who see this as nothing more than an opportunity to get a free alternative to the mutilations that go on at initiation schools?

What will be the take away message?

"Get circumcised AND were protected from HIV! (So who cares about condoms?)"

Fact: 80% of US males are also circumcised at birth.

Fact: According to the CIA World Factbook, the US has a higher HIV prevalence than 53 countries where circumcision is rare or not practiced.

Fact: According to USAID, HIV prevalence was found to be higher among *circumcised* men in 10 out of 18 African countries.

Fact: Even if the latest research is correct (and it has many questionable flaws, namely the lack of a scientifically demonstrable causal link, failure to correlate with world data, unconfirmable results, etc...), circumcision would still be ineffective at preventing HIV, so ineffective that circumcised males and their partners must still be urged to wear condoms.

Fact: Circumcision is forbidden to Gentiles under the New Testament.

It must be asked why so much money is being pumped into such a questionable procedure for which more effective, less invasive alternatives are already available.

How is something that never worked for the US going to suddenly start working miracles in Africa?

If circumcised men and their partners must still be urged to wear condoms, what is the point of promoting circumcision?

What's the point of spending millions of dollars promoting a surgery, when that money can be better spent?

Like food and water? (See what one of the parents above had to say.)

Is no one going to question the ethics of promoting what is essentially genital mutilation in a hospital setting?

Is no one concerned that this is a green light for tribal circumcisions which result in injury and death?

Is no one going to talk about all the mishaps that happen even in the medical setting?

The fact that this promotion is resulting in the forced circumcision of non-consenting minors?

Even against parental wishes?

The coercion of boys and men to get circumcised?

What is this about?

Is this truly about HIV prevention?

Or is this about legitimizing, preserving a controversial procedure that is dwindling back home?

(Back home meaning the home country of those pumping money and effort in spreading circumcision in Africa and elsewhere under the guise of public health? PEPFAR? JHPIEGO? Bill and Melinda Gates? The Clinton Foundation? CDC? What do these organizations that are so eager to circumcise millions of males in Africa have in common? They all come from America, where male infant circumcision used to be a common procedure for the majority of newborn makes, and where these numbers are falling and doctors are struggling to convince parents to circumcise their children. So is this about medicine? Or culture preservation? Subplantation? Look at the fine print; these companies' organizations' ultimate goal is to implement infant circumcision in Africa as it exists back home. Never mind this hasn't helped to prevent STDs. What is this really about? Why does the world watch in silence as the US imposes male genital mutilation on Africa under the guise of disease prevention?)


MASS CIRCUMCISION CAMPAIGNS: The Emasculation and Harassment of Africa