No one wants to come right out and say it, because doing so gets you labeled an "anti-Semite," but a particularly Jewish tradition, specifically the ultra-orthodox Jewish tradition of sucking a child's freshly circumcised penis to "cleanse the wound," is resulting in the spread of herpes in infants.

No one wants to actually write a law against this, because no governing body wants to be the first to write a law that regulates Jewish practice.

Actually, not too long ago, the NYC Health Department tried to instate a mandate to regulate the practice of metzitzah b'peh, otherwise known as "oral suction." 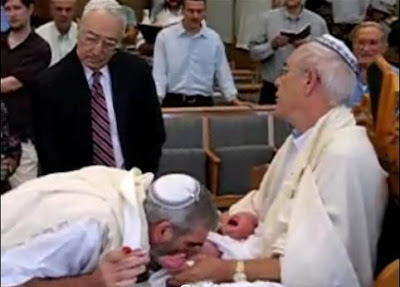 The mandate, which was supposed to be a measure to protect further boys from being infected, was pretty much toothless to begin with, because all it did was require parents to sign a consent form before allowing a mohel to perform metztizah b’peh on their sons. Furthermore, there was no real penalty or consequences for mohels if they didn't comply.

Despite the mandate being essentially impotent, ultra-orthodox rabbis were intolerant of what they saw as an "unconstitutional, shocking governmental overreach," and they managed to convince NYC Mayor Bill de Blasio to lift the mandate. In exchange for this, however, the ultra-orthodox community vowed to report the cases of herpes that resulted due to metzitzah b'peh, and to name the mohels and rabbis involved as part of a deal.

According to a recent report, there have been six cases of infants contracting herpes as a result of the traditional practice of oral suction, since Mayor de Blasio decided to lift the previously instated mandate.

Two of the mohels involved remain a mystery despite the ultra-orthodox community's agreement to help the city identify, and isolate any mohels responsible for infecting infants with herpes through oral suction.

At least on paper, all cases of neonatal herpes are required to be reported to the city's Health Department shortly after they occur. In response to each case, health officials were supposed to issue a “health alert” notifying medical practitioners in an effort to educate them about the potential hazards of the practice.


I think the problem here is obvious.

Nobody is willing to call a spade a spade for fear of looking like "the bad guy."

Meanwhile, healthy children are getting infected with herpes, in some cases, resulting in death.

It really must be asked; when deciding these things, whose interests do people really have at heart?


While PACE Holds a Hearing on Circumcision, Another Baby Contracts Herpes in NYC