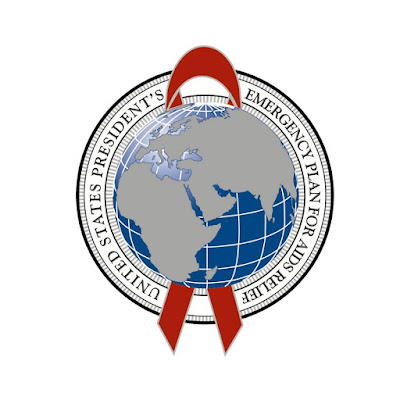 It's surprising the claim that bing circumcised "reduces the risk" of Ebola hasn't been made yet.

I was scrolling through my Facebook newsfeed when I run into this shit. 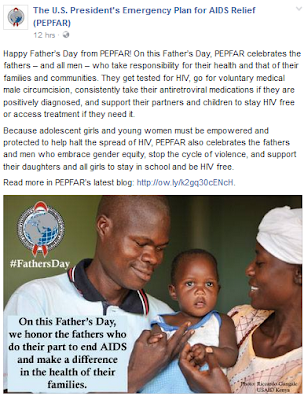 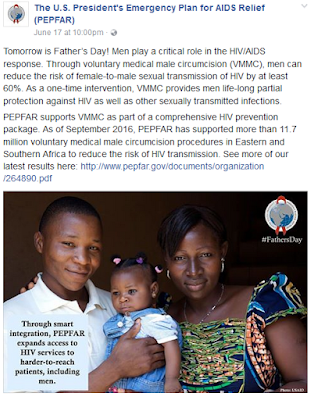 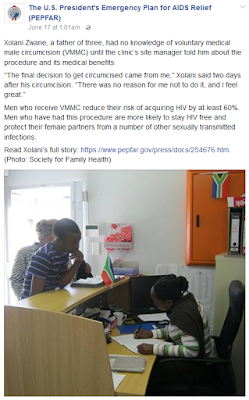 They took Father's Day and used it as an opportunity to promote circumcision.

The way male circumcision, perhaps even HIV, is mashed up with Father's Day seems rather forced and contrived, one thing not having to do with each other.

At its simplest reduction, the message is, Happy Father's Day, reduce HIV, get circumcised.

It sounds like the people in charge of PEPFAR PR have run out of ways to bang the circumcision pot.

What does Father's Day have to do with HIV prevention?

And what does circumcision have to do with anything?

The message is as convoluted as you can get.

Good Fathers Get Tested and Circumcised Before Cheating
Fathers, who are assumed to be living with their families, have to "do their part" to prevent HIV transmission, by getting tested and getting circumcised.

Stay with me here.

Why would fathers need to do this, other than the assumption that fathers are expected to be promiscuous and unfaithful?

That ought to make fathers feel warm and fuzzy inside.

Accepting It's OK To Assume Fathers Will Be Promiscuous...
OK, now taking as a given that it's perfectly fine to assume fathers are going to sleep around and engage in risky sexual practices with their children, why circumcision?

Why the need to graft the far-removed subject male circumcision into the conversation?

I can only imagine what is going through the PEPFAR worker's mind.

Father's Day is as good time as any to talk about HIV prevention. (Because, again, what says "diligent father" than a man who goes out on his family and children to engage in risky sexual practices?)

And nothing prevents HIV transmission better than HIV (except maybe condoms and refraining from risky sexual practices, e.g., going out on your wife).

How Much Longer?
How long is this farce of pretending to be interested in HIV prevention and men's health when the real reason is to defend the forced genital cutting that goes on back in our own country going to go on?

When are other medical authorities around the world going to denounce the promotion of "mass circumcision campaigns" as the scientific profanity and crime against humanity that it is?

Male Circumcision Does Not, Cannot Prevent HIV Transmission
Even if the "research" held any water (it's replete with flaws), circumcision would only "reduce" the risk of HIV transmission from female to male by 60%.

What is the risk of a female getting HIV from an HIV positive man who has sex with her without a condom?

What power does she have to demand her man wear a condom, if her man believes he is "protected" by circumcision?

This is why circumcised men and their partners must be compelled to continue to use condoms.

A good father remains FAITHFUL to his wife, thereby preventing HIV transmission to her and/or any future children.

What kind of message does "going for circumcision" send?

That he intends to sleep around and possibly contract the disease?

And what further that it say?

That a father may infect his daughter somehow?

How absolutely disgusting that circumcision advocates are taking this opportunity to promote a dubious, failed HIV prevention method.

In America, 80% of men are all circumcised. Yet, according to the CIA World Factbook, we have a higher HIV prevalence than 53 countries where circumcision is rare or not practiced.

If circumcision "reduces HIV transmission," this is not evident in America.

It's not evident in 10 out of 18 African countries, where HIV is more prevalent among the circumcised.

Why is PEPFAR pushing this?

What does promoting HIV prevention have to do with Father's Day?

What message does it send?

I hope President Trump defunds this next.

Using millions if not billions of our tax dollars to push dubious forms of HIV prevention that have never worked, to push insulting and dangerous propaganda is a complete waste of money.

Posts on how circumcision may actually be worsening the HIV problem:
UGANDA: Myths about circumcision help spread HIV