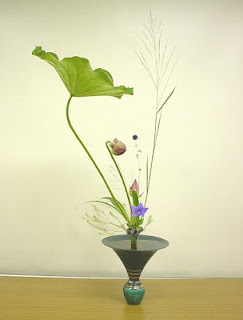 I was recently reading a book called "The Book of Tea" by one Kakuzo "Tenshin" Okakura. The book is about the Japanese Tea Ceremony, and it focuses on many aspects of it.

One of the aspects of the Japanese Tea Ceremony is the appreciation of flowers, and there is an entire excerpt dedicated to this one thing. I found part of this chapter to be quite a parallel to the circumcision of children.

Begin excerpt:
Tell me, gentle flowers, teardrops of the stars, standing in the garden, nodding your heads to the bees as they sing of the dews and the sunbeams, are you aware of the fearful doom that awaits you? Dream on, sway and frolic while you may in the gentle breezes of summer. Tomorrow, a ruthless hand will close around your throats. You will be wrenched torn asunder limb from limb and borne away from your quiet homes. The wretch, she may be passing fair. She may say how lovely you are while her fingers are still moist with your blood. Tell me, will this be kindness? It may be your fate to be imprisoned in the hair of one whom you know to be heartless or to be thrust into the buttonhole of one who would not dare to look you in the face were you a man. It may even be your lot to be confined to some narrow vessel with only stagnant water to quench the maddening thirst that warns of ebbing life.

Flowers, if you were in the land of the Mikado, you might some time meet a dread personage armed with scissors and a tiny saw. He would call himself a Master of Flowers. He would claim the rights of a doctor and you would instinctively hate him, for you know a doctor always seeks to prolong the troubles of his victims. He would cut, bend, and twist you into those impossible positions which he thinks is proper that you should assume. He would contort your muscles and dislocate your bones like any osteopath. He would burn you with red-hot coals to stop your bleeding, and thrust wires into you to assist your circulation. He would diet you with salt, vinegar, alum, and sometimes, vitriol. Boiling water would be poured on your feet when you seemed ready to faint. it would be his boast that he could keep life within you for two weeks longer than would have been possible without his treatment. Would you not have preferred to have been killed at once when you were first captured? What were the crimes you must have committed during your past incarnation to warrant such punishment as this?

Why were the flowers born so beautiful and yet so hapless? Insects can sting, and even the meekest of beasts will fight when brought to bay. The bird whose plumage is sought to deck some bonnet can fly from its pursuer, the furred animal whose coat you covet for your own may hide at your approach. Alas! The only flower known to have wings is the butterfly; all others stand helpless before the destroyer. If they shriek in their death agony their cry never reaches our hardened ears.

Well? What did you think?

To me, it invokes the vision of a tiny, helpless, sleeping child before an eager circumcisor. It tells the story from the point of view of an onlooker who knows what is about to happen.

This passage is about flowers who are but a means of art for a sculptor. But I think these same principles could be applied to the circumcisor, his subjects and the appreciators of his work. It is all too often I hear from circumcision advocates that they much prefer the circumcised penis because it "looks prettier" and/or more "sexually appealing." 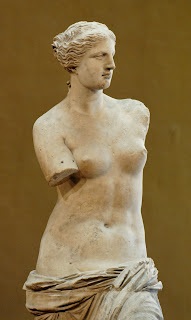 I wonder what the statue of Venus looked like when she had arms...
If she were alive, I wonder, would she have preferred to keep them?
Posted by Joseph at 8:13 PM