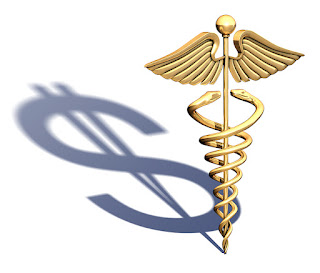 American medical organizations try to minimize the risks and complications of male infant circumcision, and for good reason. In the US alone, 1.3 million babies are circumcised annually, and members who perform the procedure who stand to gain from it have reputations and pocketbooks to protect.

Thus American medical organizations are faced with the difficult situation of having to choose between publishing data, or disenfranchising their members who reap profit from performing the procedure.

Hospitals are not required to release data concerning any adverse effects of circumcision, and physicians who have reputations to protect, and lawsuits to avoid, have incentive to purposefully misattribute them to other causes, or simply keep them floating, and disconnected from circumcision.

A child suffered hemorrhage from a wound. (Which wound?)

A child died of hemorrhage. (Why was the child bleeding in the first place?)

Physicians and hospitals are careful to omit circumcision from the picture.

Here are the latest cases of circumcision botches that have been posted on Facebook. 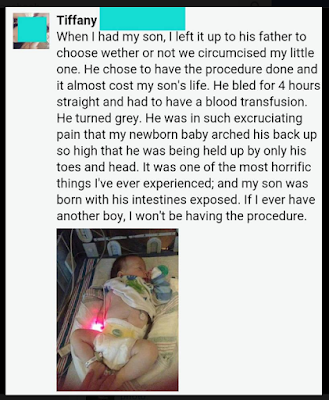 The child was already suffering enough as it is; doctors brought him even closer to death by performing this elective, non-medical procedure on him.

How is it these doctors aren't being sued for charlatanism and malpractice? 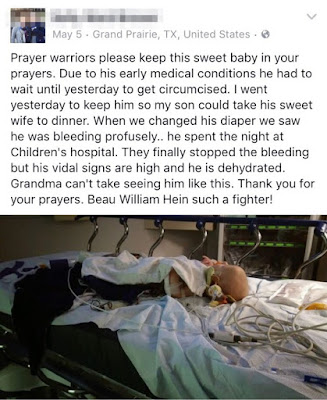 In this case, a grandmother discovers the child is bleeding without stopping, and asks for prayers.

Prayers that would not have been needed had the child not been put through this needless procedure.

Here too, it seems the child was already suffering due to other medical conditions, but they decide to compound his situation further.

Why does this child have to "fight?"

What did he do that he has to defend himself at this age?

An irony that they are asking for "prayers" after doing something to their child that is expressly forbidden in the Bible.

Risks that doctors and hospitals with money to gain would rather minimize, or not mention at all.

Tales on Facebook abound, but the great majority will never make it to news outlets.

Given that circumcision is an elective, non-medical procedure, how is it conscionable that healthy, non-consenting minors are being put at these risks to begin with?

How is any number of children succumbing to any of these risks above zero conscionable?

Is the AAP counting? Because we certainly are.


Related Posts:
CIRCUMCISION DEATH: This Time in Italy
FACEBOOK NEWS FEED: A Complication and a Death
INTACTIVISTS: Why We Concern Ourselves
MALE INFANT CIRCUMCISION: Another Baby Boy Dies
Circumcision Death: Another One Bites the Dust

Phony Phimosis: How American Doctors Get Away With Medical Fraud
Posted by Joseph at 10:34 AM