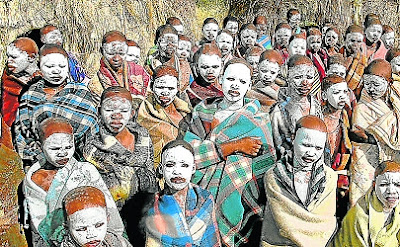 Yearly, circumcision initiation rites happen all over Africa. Every year scores of men either die, or they lose their penises to gangrene, but for whatever reason, these deaths and loss of external genital organs in male initiates are overshadowed by female circumcision.

In a recent news article, the deaths of two initiates have been reported. (Link available here. Last accessed 6/22/2016) A list of articles in past years can be read here.

In some newsreports, readers are supposed to take comfort in the fact that some very shoddy "studies" show that male circumcision "could" "reduce" HIV transmission by "as much as 60%."

Or would they still be decrying it?

What if female circumcision could be made "quick and painless" with "no detriment to female sexuality?"

Would it still be viewed as a human rights violation?

A paper calling for a compromise procedure for females has recently been published in the Journal of Medical Ethics.

Whereas "researchers" were eager to push the idea that "circumcision is a harmless intervention that could help prevent the spread of HIV," scholars discourage the publishing of research that would "play right into the hands of those who defend female genital cutting" and/or "encourage female genital mutilation."