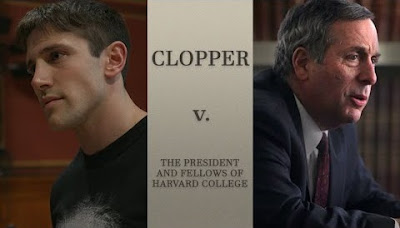 I'm a little late in the game when it comes to reporting this, but as they say, "Better late than never."

Your blogger is busy with life and he somehow wishes he could be both an intactivist and supporting himself financially... Oh well... The best I can do is support other more important, more prominent intactivists...

On May 1st, 2018, Eric Clopper performed a play called Sex and Circumcision: An American Love Story at Harvard University's Sanders Theatre, where he staged the world's ultimate take-down of male infant circumcision as both a medical and religious ritual.

For this, Clopper was immediately placed on leave pending "a full review of the May 1 performance and events leading up to it."

Harvard suspended Clopper for 2 months for a supposed "investigation," during which Harvard’s student news paper, The Crimson, published 5 libelous articles against him, and refused to publish his letter to the editor.

In addition, to having solicited claims against him and eliminated his position, Harvard colluded with the sound company that handled Clopper’s show to obtain intimate footage of his, which they then showed to senior administrators, his boss, his friends and colleagues.

In essence, Harvard University, The Crimson and Baystate Sound colluded in a smear campaign against Clopper.

But why would anyone want to do this?

The answer is clear:

That is the tactic and strategy of people who have no logical leg to stand on; cancel and silence.

So solid and irrefutable is Clopper's message, that the only chance people who want to silence him have is to disenfranchise him by attacking his character and plaguing him with financial ruin and shame.

That same year, Clopper set out to play David to Harvard's Goliath, setting up a GoFundMe to cover litigation expenses.

And now, it seems, Eric Clopper is finally armed and ready to fight.

“My attorneys and I have officially filed suit against Harvard and other parties for the violation of my Constitutional Rights and other claims in the Federal District Court of Massachusetts.

If you'd like to support my and my attorney's legal efforts, and to get a copy of the pleadings, you can go to my site, subscribe for updates if you'd like, donate to our effort if you can, and there are various ways to get in touch with me if you'd like : https://www.clopper.com/harvard-lawsuit”

I am going to be relatively quiet in the immediate future, but in the coming months and year, I will have many updates on this and other issues.

Harvard Censors Intellect for Circumcision Play at Sanders Theatre
Posted by Joseph at 8:59 AM